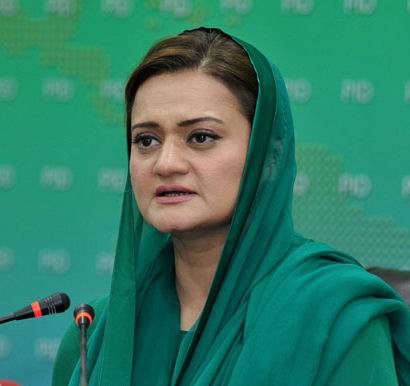 ISLAMABAD (APP): Minister for Information and Broadcasting Marriyum on Monday dubbed Pakistan Tehreek-e-Insaf (PTI) Chairman Imran Khan an “ungrateful person”, who would change “his colour like a chameleon” once his motives were achieved.
Her remarks came in the backdrop of the current political situation that evolved after Imran Khan’s announcement for the dissolution of assemblies in both Khyber Pakhtunkhwa and Punjab.
“Imran Khan is a political chameleon who changes his colour to fulfill his motives,” she said while accusing him of a conspiracy aimed at bringing political instability to the country.
She said Imran Khan had the audacity to offer a lifetime extension to those whom he termed “Mir Sadiq, Mir Jafir and neutrals” in public gatherings.
Marriyum felicitates newly elected office bearers of IHC Journalist Association
Minister for Information and Broadcasting Marriyum Aurangzeb on Monday congratulated the newly elected office bearers of Islamabad High Court (IHC) Journalist Association including its President Rizwan Qazi and General Secretary Hussain Ahmed Chaudhry.
She also felicitated the IHC Journalists Association newly elected governing body as well as its Senior Vice President Farah Mahjabeen, Senior Joint Secretary Imran Mansab Khan, Finance Secretary Haseeb Riaz Malik, Joint Secretary Basharat Raja and Press Secretary Ambreen Ali.
The minister, in a news statement, said the election of newly elected office bearers showed that the journalists reposed full confidence in them.
She hoped that the elected members would meet the expectations of their fellow reporters. The role of court reports in journalism was crucial, she remarked.