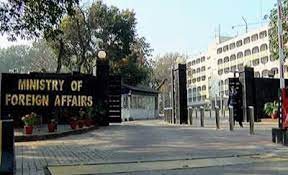 ISLAMABAD: The Foreign Office on Saturday rejecting a statement of the Indian Ministry of External Affairs (MEA) said that the masterminds of the Gujarat massacre had escaped justice and now held key government positions in India.

“With its statement, the Indian Government has tried to hide behind subterfuge and canard to conceal the realities of the 2002 Gujarat massacre. It is a shameful story of mass killings, lynching, rape and plunder. The fact of the matter is that the masterminds of the Gujarat massacre have escaped justice and now hold key government positions in India,” the Foreign Office Spokesperson said in a press release.
Responding to media queries, the spokesperson said no verbosity could hide the crimes of the “Saffron terrorists” in India, adding Hindutva, the political ideology of the ruling party, had given rise to a climate of hate, divisiveness and impunity.

The culture of impunity was now deeply embedded in Hindutva-driven polity in India. The acquittal of the mastermind and perpetrators of the heinous attack on the Delhi-Lahore Samjhota Express, which killed 40 Pakistani nationals on Indian soil, demonstrated the massacre of justice under the RSS-BJP dispensation.

“Intimidation and demonization of religious minorities receives official patronage in states across India. Hindutva supremacists have been unleashed to exercise cow vigilantism, ransack places of worship, and attack religious congregations,” it was further added.

The spokesperson said as it peddled a fictitious narrative of victimhood, it was itself a perpetrator of repression in Indian Illegally Occupied Jammu and Kashmir and a sponsor and financier of terrorist groups in South Asia.

Only this week, she said a dossier was released containing irrefutable evidence that substantiated India’s involvement in the 2021 terrorist attack in a peaceful Lahore neighborhood. “The evidence gathered with international support confirms that the Lahore attack was instigated, planned and financed by the Indian state,” the press release quoted the spokesperson.

The MEA statement was also a reflection of India’s growing frustration over its failure in maligning and isolating Pakistan. After being unable to prevent Pakistan’s exit from the FATF Grey List in October and international recognition of Pakistan’s counterterrorism efforts, India was desperately using international platforms to advance its agenda to defame and target Pakistan.

“For a country with a grandiose vision about itself and its place in the world, India is following a policy of pettiness towards its neighbours. We are confident that the international community would look through this facade and the dream of RSS-BJP to turn South Asia in its image will remain unrealized,” it was further added. (APP)