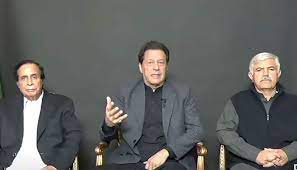 LAHORE: Pakistan Tehreek-e-Insaf Chairman (PTI) Imran Khan Saturday announced to dissolve the Punjab and Khyber Pakhtunkhwa assemblies next Friday while addressing his party’s workers and supporters via video link from his residence in Lahore’s Zaman Park.

Imran Khan said they will also go back to the national assembly and would ask the speaker to accept their resignations en-masse instead of hoodwinking people by accepting the resigns through pick and chose.

He said they will try to further delay the elections and he thinks that these elections will not be held even in October with the connivance of the Election Commission of Pakistan.

Imran thanked the two provincial chiefs for their cooperation with his party, and said that he had consulted PTI’s lawyers about the move, adding that the Constitution did not allow elections to be delayed beyond 90 days of an assembly’s dissolution.

“Then we will prepare for elections after that and our around 130 seats in the National Assembly, we will go to the NA speaker and demand him to accept our resignations instead of picking a few,” Imran elaborated on the PTI’s plan of action after dissolving the assemblies.

Imran told the nation to refrain from being disappointed, saying it was akin to “running away from our duty to society”. He said a “lesson should be taught through elections” to the government and deal it “such a defeat that the names of these thieves are wiped out forever”.

Imran started his address by lashing out at the current economic situation of the country and contrasted that with his government’s performance.

He lamented the brain drain ongoing in the country, saying that skilled people and professionals were leaving the country in droves.

“My question today is, who was responsible for this regime change?” he said, referring to his government’s ouster via a no-confidence motion earlier this year.

The PTI chief said he wanted to inform the people about why did he decide to dissolve the assemblies in both the provinces where his party ruled.

“In this country, until free and fair elections don’t take place […] fears will still remain that the country might sink.”

He said those who were looting the country for 30 years have returned to the power.

Khan said due to frustration, 750000 Pakistanis left the country in 7 and a half months.

Imran Khan fears that the country will sink if there is no clean and transparent election.

He said Mahmood Khan and Pervaiz Elahi are sitting with him and today they have to make an important decision.

Imran said unemployment and inflation were on the rise and foreign confidence in the country had eroded, leading to investments drying up.

“Loans keep on increasing. There was only one way which we did: to increase the country’s wealth. They (the government) don’t have a plan.”

The PTI chairman once again raised the question of who was actually responsible for the current affairs of the country. “Only one man is responsible: General Bajwa. I didn’t speak out against him because he was the army chief,” Imran added.

“We want our army to be strong so we kept quiet and kept looking at how the conspiracy happened.”

He said the former army chief had “decided to remove us (PTI government)”.

“My next question is that when the government was ousted and they got to know that the public came to stand with us … and rejected these thieves and our popularity started increasing … then instead of admitting that you made a mistake, [instead] the kind of injustice they did against us, I never saw it before,” Imran said.

The PTI chief mentioned the treatment being meted out to party senator Azam Swati and those who support the PTI, alleging that the former army chief was behind it all and also responsible for giving “NRO-2” to leaders in government.

“I was told at one point by Gen Bajwa that we have files on your people about corruption and their videos have been made. I said to him, ‘Is this the job of our agencies? That they make videos and files on people? This nation sustains its agencies for their security by sacrificing.’”

The former prime minister also mentioned his own audio leaks, saying that he was the premier and “my own phone was tapped … no one is asking that this is a violation of the Official Secrets Act. Where does this happen? If I am talking to my principal secretary then that was leaked.”

Imran claimed that according to an opinion poll, “70 per cent” of the people were demanding fresh elections, saying that is what the PTI had attempted to convince the government about through its second long march.

Imran said he provided all the details to the courts about his assets just like every commoner in Pakistan — unlike the ones who “looted” money of the masses and siphoned it abroad.

“All their money, business, and children are abroad. They are living a luxurious life in Pakistan after looting the nation’s money,” Imran said, claiming that he never thought that he could ever live anywhere else except Pakistan.

The PTI chief said that for the first time in his life, he “fears” that the “corrupt gang” imposed on the country was taking the nation toward destruction. “You can ask any industrialist, labour, and farmer; their finances cannot be managed amid the ongoing economic situation.”

The former prime minister claimed that Pakistan witnessed 50-year high inflation after the incumbent government came into power. “They washed away all the hard work we did.”

The PTI chief mentioned that the economy — including industries, taxes, exports, and agriculture — witnessed a boost during his party’s government, which lasted for nearly four years.

Imran further lamented that his government — which was ousted in April — worked hard to revive the economy that was on the brink of default when the Pakistan Muslim League-Nawaz (PML-N) left the government in 2018.

“All these growth targets were achieved because we were hand-in-hand with America on several fronts. So, who was behind all this regime change operation? Why were these corrupt elements brought into power?”

Imran said the direct foreign investment, remittances, tax, and exports have all decreased. “Foreign investors do not trust the government. Since we do not have dollars for repaying energy debt, foreign debt […]. They do not have a plan except seeking loans from China.”

He said loans were not enough as it is tantamount to treating cancer with disprin tablet. “The only solution to it is through wealth creation. If you create wealth, you can ensure that you don’t have to beg loans for the next time.”

Blaming the coalition government for mishandling the country’s economy, Khan said: “Had they managed the economy well, we would have been fine with them completing the term, but the country is going down. Everything is going down in the country. I’m afraid [Pakistan] is moving toward default.”