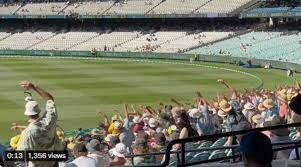 MELBOURNE: South African fast bowler Kagiso Rabada pulled all the attention from the centre of the Melbourne Cricket Ground where his team was being hammered by the Australian batters on the second day of the second Test on Tuesday.

The hosts were 231-2 at tea on day two of the second Test, leading by 42 runs after the Proteas were dismissed in their first innings for 189.

However, Rabada channelled his inner Merv Hughes (former Australian fast bowler) down at fine leg in front of Bay 13 stand as he performed a variety of different stretches which the crowd gleefully copy in unison. Fantastic scenes. A real throwback!