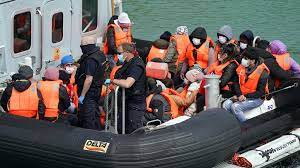 LONDON (AFP): Four migrants who died when their dinghy capsized in the Channel on December 14 may have been from Afghanistan and Senegal, a UK inquest into their deaths heard on Friday.

The four victims from the packed boat were still unidentified, Katrina Hepburn, the coroner in Kent in southeast England said as she opened the hearing.

However, it is “possible” that two were from Senegal and two from Afghanistan, Hepburn said, citing a report from Kent’s police force.

The inquest was adjourned to a later date pending further police inquiries.

The inflatable vessel got into trouble in freezing temperatures, sparking a rescue operation involving Britain’s coastguard and other emergency responders as well as a fishing boat in the area.

On Sunday, police said Ibrahima Bah, 19, was charged with facilitating attempted illegal entry to the UK.

The sinking came just over a year after at least 27 people died in the Channel in another incident.

The UK government has vowed to curb the growing number of migrants willing to risk their lives crossing the Channel — one of the world’s busiest shipping lanes.

Judges in London on Monday ruled that its controversial plan to deport all those arriving that way to Rwanda was lawful following a legal challenge by rights groups and others.

A record total of more than 45,000 migrants have made the dangerous journey from northern France in small boats ill-suited for open sea conditions this year.