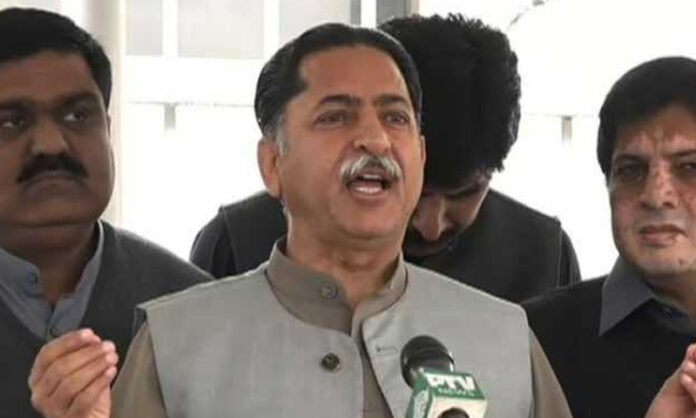 LAHORE (NNI): Expressing his exasperation, Federal Minister Javed Latif has said that some forces want Imran Khan to remain politically popular. Mr Latif was addressing a presser in Lahore on Sunday. He said it is mindboggling why no decision has been made on the pending cases against PTI Chairman Imran Khan.
The federal minister further said patronage was openly continued till 2022. Did the chief of the establishment of that time not know that the letter was fake? Did Saqib Nisar, who gave the certificate of Sadiq and Amin, not know about this playboy?” he questioned.
“Imran is being made Sadiq (truthful) and Amin (trustworthy) in another form,” the federal minister blasted wondering in whose interest it was to keep Imran politically popular.
“Will this joke be played over and over again,” he said adding that once again the tug-of-war is being started.
He said PML-N supremo Nawaz Sharif has rendered so many sacrifices for the sake of this nation and state. Nawaz’s sacrifices are being wasted, he rued.
Those who defamed Nawaz Sharif should be taught a lesson. Nawaz Sharif should be apologized to and brought back.
Javed Latif said Nawaz Sharif will repeatedly sacrifice for the country? On whose wish was Nawaz Sharif removed in 2017? After the confessional of the accused, the matter was digested. “They were demanding to form a commission in 2017, today the matter has gone beyond the truth commission, money has to be taken out of the pockets of the accused of 2017,” he added.
He said Nawaz Sharif did not take the guarantee and does not want it even today. “Nawaz Sharif will not sacrifice anymore as he made many sacrifices for the state. His sacrifices were wasted. 20 by-seats were also being facilitated,” he added.
The federal minister further said five people have harmed the state in all economic and political aspects. It will not be enough as Nawaz Sharif should be declared innocent and brought back to Pakistan. Nawaz Sharif must be brought back as a sign of punishment to the punishers. The date of Nawaz Sharif s return will be announced after the election date for both provinces.
He said that due to the looting of the former government, there has been a wave of inflation in the country and Imran Khan is responsible for bringing Pakistan to this level.