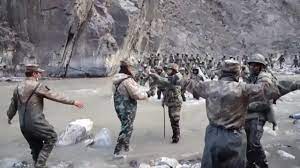 The face-off on Friday resulted in minor injuries to few soldiers on both sides, the report added.

An Indian foreign ministry spokesperson did not immediately respond to a request for comment.

Indian and Chinese troops also clashed in June 2020 in hand-to-hand combat in the Galwan valley in Ladakh, abutting the Chinese-held Tibetan plateau.

Twenty Indian soldiers were killed, with China suffering an undisclosed number of casualties, and both sides ramped up their military presence, moving men, weapons and supplies to the high-altitude desert region.

India and China share an un-demarcated 3,800 km (2,360 mile) frontier, where their troops previously adhered to long-standing protocols to avoid the use of any firearms along the de facto border known as the Line of Actual Control (LAC).