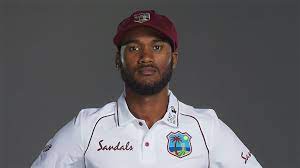 ADELAIDE: West Indies captain Kraigg Brathwaite lamented that his team “didn t show any fight” in Adelaide but believed that overall they had produced a successful year in Test cricket.

They crashed to a 419-run defeat within the opening session of the fourth day, their heaviest runs defeat in Test cricket, having shown heart to take the first Test deep into the penultimate session.

In both matches West Indies  bowling attack was put to the sword by a combination of Marnus Labuschagne, Steven Smith and Travis Head. A couple of late wickets for Alzarri Joseph in Adelaide made him their leading bowler with five at 53.00 – highlighting their struggles – amid a string of injuries that left them with a patched-up attack.

Brathwaite produced their standout knock of the series with 110 in the second innings in Perth, but no one passed fifty in Adelaide as they could only make 214 and 77.

“It was very disappointing. The first game, we fought to day five which was a decent effort. Coming here we didn t show any fight at all,” Brathwaite said. “Obviously Australia bowled well but we didn t fight. The pink ball is always different, under lights is always tough. Bad days happen and bad games. This was a bad game for sure, but it s not the end of the world, we have a lot of Test cricket to play next year so we have to look ahead.”

West Indies came into the series unbeaten in five Tests for the year – including three wins a row – and, before the Adelaide match, were above England and New Zealand on the World Test Championship table.

Brathwaite was adamant that, viewed as a whole, and given the strength of the opposition they faced in this series, that it had been an encouraging year in the format.

“This loss is a little disappointing and how we didn t show the fight,” he said. “But I still think it was a good year for us – a very good year – losing one series against probably the No. 1 team in the world is not a bad effort.”

West Indies  next Test cricket will come on tours of Zimbabwe and South Africa in early 2023. They are then due back in Australia in a little over 12 months  time due a quirk of the next World Test Championship cycle, which has seen them paired together again with no other spot on the calendar to try and space out the series a little more. CA had tried to find another window to avoid back-to-back summers with the same opposition but it wasn t possible.

Brathwaite hopes that those players who return can use what they have learned from watching the Australians go about their work with this Test series having been West Indies  first here since 2015-16.

“For a lot of the guys it was their first time to Australia,” he said. “The experience would help, both as batsmen and bowlers. Seeing how Australia play, how their batsmen started their innings, we can learn from that and then how their bowlers bowled throughout a spell. At times in Perth they bowled for the whole day but then you see the areas they bowled. Australia will always be a strong team at home but the key from experiences is learn from them.”

One of the encouraging aspects for West Indies was the debut series of Tagenarine Chanderpaul who made 51, 45, 47 and 17 at the top of the order alongside the captain. Such was his occupation of the crease that Australia got very inventive with their fields when they went at him with a short-pitched attack, although Chanderpaul blotted his copybook by running himself out in the first over of the third day.

“It showed that he s tough,” Brathwaite said. “You ve got Mitchell Starc coming in at 90mph and you see a guy fighting like that, says a lot about his character. I thought he had a good start to his career and can see him really blossoming to have a superb career for West Indies.”

Brathwaite, himself, meanwhile said he retained the hunger and desire to lead West Indies.

“I love Test cricket and [am] thankful for the job. We ll see how it goes. I want to lead this team from the front, especially with the bat, that s my job. As a group we have the talent, we have the ability. It s for us to believe in ourselves and you learn from all the challenges you go through.”