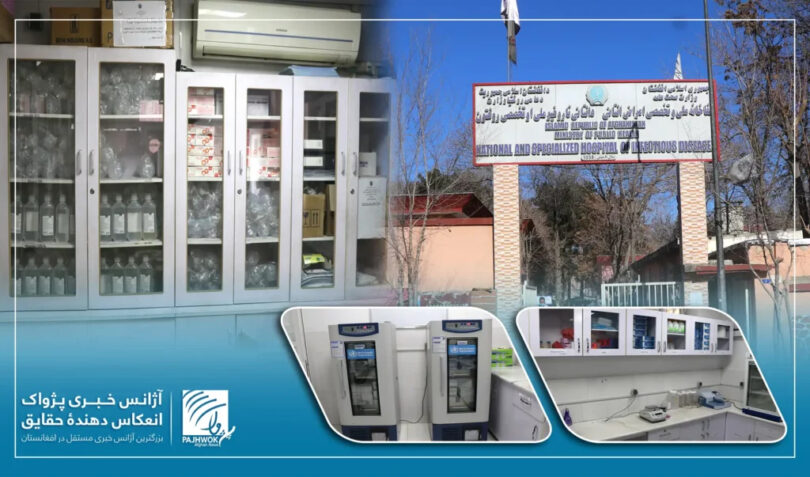 KABUL (Pajhwok): People are happy with free test facilities and medicines provided to patients at the Antani and Ataturk hospitals in Kabul, while the Ministry of Public Health says free health services are provided in all government hospitals except some.
MoPH spokesperson Dr. Sharafat Zaman told Pajhwok all 21 specialized hospitals in Kabul city, except stomatology hospital, had been providing free tests facility and medicines to patients since a year with the help of some aid giving agencies. Such free services are provided in specialized hospitals in provinces as well, he said.
When asked if free services were provided in other government hospitals like Wazir Akbar Khan hospital, he replied in the affirmative. He said it was their condition for aid organizations that tests and medicines should be provided free of cost in hospitals.
Pajhwok Afghan News talked to relatives of patients and doctors in Antani and Ataturk hospitals. Some time ago, a laboratory was established and put into service in the Antani hospital with financial support of the World Health Organization. In the lab that consumed 400,000 US dollars, 17 types of diseases are diagnosed.
Ihsanullah Hakimi, trainer specialist of Kabul Antani Hospital, told Pajhwok that since last five months CBS, PCR, black and white jaundice, various liver tests (Electrolyte), Congo, dengue and some other tests were conducted free of cost with the help of WHO. Previously, patients would undergo these tests in private laboratories against a high price, he said, elaborating that PCR test cost 3000 afghanis, CBS 300 afghanis, Congo and Dengue 800 afghanis and some liver tests were done for 600 afghanis in private labs.
But in now in Antani hospital, CBS test fee is 20 afghanis, PCR 100 afghanis, Congo and Dengue 50 afghanis and liver tests only 30 afghanis, he added.
Zainab Faizi, a doctor at the emergency department of Antani Hospital, also said previously facilities in the hospital accounted for 40 to 50 percent, but now these facilities had reached 100 percent in terms of tests and free medicines.
She said the facilities had increased with the help of the World Health Organization (WHO).
Ramazan, relative of a patient, said his patient was admitted in the hospital about a week ago and so far tests advised by the doctors had been done free of charge in the hospital.
Another person Zabihullah said his patient underwent 15 tests during the past five days and all were done free of charge.
Abdul Aleem Adib Karimi, a pharmacist and general controller at Ataturk hospital, also said that a year ago, only CBC, liver tests (Electrolyte) and fecal tests were performed in the hospital and patients had to visit private labs for other tests.
But since one year, most of the tests were done free of cost in the hospital, he added. He said currently about 50 different types of tests were being conducted in the laboratory of Atatürk Hospital, including HBs, HCV, HIV, DLC and CRP free of charge to all patients. A mother, who had brought her child to Atatürk Hospital for treatment, was satisfied with the care at the hospital, saying patients were inquired after on time, their files checked and children were also given milk.
She said patients were checked free of cost, but sometimes when some tests were not available in the hospital, they visited private laboratories.
Medicines
Ihsanullah Hakimi, trainer specialist at Kabul Antani Hospital, said now patients in the hospital were given medicines that they used to buy in the market.
Ramazan, a patient’s relative, said his patient was given free medicines since his admission several days ago. Zabihullah, another attendant in Antani hospital, also said he had not purchased any medicine from the market and his patient was given any medicine he needed for free.
Arish Ahmadi, pharmacy manager at Atatürk Hospital, said there were about 140 types of medicines in the pharmacy department of the hospital and all were given free of charge to hospitalized patients. Mohammad Attai, a patient’s relative, said most of the patients were given medicines free of charge, but sometimes they had to buy some medicines from private pharmacies if not available in the hospital.