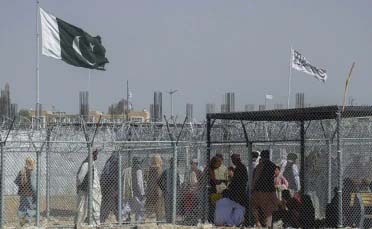 WASHINGTON DC: Certain forces and lobbies around the world are working on seeing Afghanistan and Pakistan further escalate their hostility with each other or maybe even worse by going towards surgical strikes on each other’s land and properties.

These lobbies are motivating Pakistan to take action against TTP hideouts in Afghanistan but these lobbies are not taking into consideration that during over twenty years of US forces in Afghanistan, Pakistan had these same concerns that terrorists from across the border from Afghanistan are coming into Pakistan and conducting their terrorist activities. At that time Pakistan mostly accused Indian sponsored terrorist groups. But now it’s the TTP claiming responsibility for every terrorist attack in Pakistan.

When Suhail Shaheen, the Taliban interim government spokesperson was asked about Pakistan targeting TTP hideouts in Afghanistan, he replied by saying that “ taking action inside a country under whatsoever name provokes reaction which leads to flaring up war and distrust between the two countries. None will benefit. Only those who fish in troubled water will benefit.”

Afghanistan recent conduct with regard to girls education is creating more and more hatred for the Taliban government and some senior Taliban officials even do not agree with their leadership over girls education. “I am completely for girls education with Hijab” a senior Taliban official said. In the midst of all this some international forces are raising concerns about ISIS, Al Qaeda and TTP hideouts in Afghanistan. Which is again something contradictory to what the Taliban had agreed to in Doha, that they will not allow foreign terrorist groups to take refuge in Afghanistan.

When asked about this scenario a senior journalist here in Washington DC stated that any such move will bring about tremendous reaction from the Pakhtun populations which mostly resides on both side of the Af-Pak region. He further said that obviously the Pashtuns will be the ones who will suffer the most on both sides of the border.

Another journalist opined that such scenario will make the security situation very difficult for both the countries because people from both sides of the border, look alike, speak alike and even dress alike. He also said that maybe some bigger forces want to use such scenario for their personal gains.