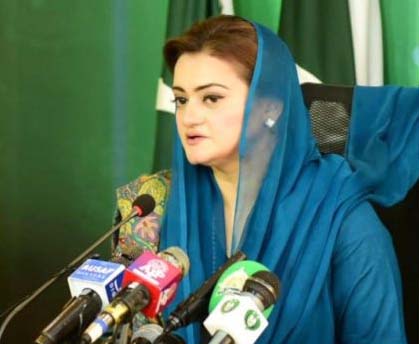 ISLAMABAD (APP): Minister for Information and Broadcasting Marriyum Aurangzeb on Friday said that with the grace of Allah Almighty a major disaster was averted in Islamabad.
In a tweet, strongly condemning the incident of terrorism, she paid rich tributes to ICT Police and Eagle Squad. She said that martyred Adeel Hussain who sacrificed his life in the line of duty and his injured colleagues were heroes of the nation. The minister said Pakistan’s prosperity lies in the complete elimination of terrorism from its soil.
She prayed to Allah Almighty to rest the departed soul of the martyred in eternal peace and grant courage to the bereaved family to bear this loss with fortitude. She prayed for the early recovery of the injured.
‘Imran was imposed on nation by stealing Nawaz Sharif’s mandate’, says Marriyum: Minister for Information and Broadcasting Marriyum Aurangzeb said on Friday that in 2018 elections Imran Khan was imposed on the nation as prime minister by stealing Nawaz Sharif’s mandate. “Anything that is not yours must be returned to the original owner”, she said in her reaction to Pakistan Tehreek-e-Insaf Chairman Imran Khan’s statement.
She said that Imran Khan was fully aware that his government would fell when he lost majority in the National Assembly and his lies, corruption and incompetence were the reasons behind PTI regime’s downfall.
” Hundred per cent Pakistanis say that the only solution to the country’s problems is transparent elections, but after the completion of the constitutional term by October 2023″, she maintained.
Castigating PTI chairman, she said Imran Khan took anti-people steps, violated the constitution and played with the country’s interests, especially on Kashmir issue. She reminded Imran Khan that today was December 23, the day he had claimed, “Punjab and Khyber Pakhtunkhwa assemblies would be dissolved.” She said that people’s war was against those who ran away from accountability after looting the country and Toshakhana. Imran Khan’s loot and plunder destroyed employment opportunities in the country, she remarked.