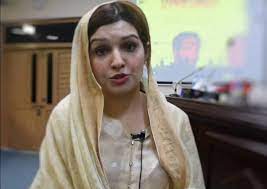 ISLAMABAD: Chairperson of Peace and Culture Organisation, Mushaal Hussein Mullick has fired a broadside at fascist Narendra Modi-led government and Indian kangaroo courts for denying Yasin Malik his fundamental, legal and constitutional rights to be presented physically in Jammu courts to cross-examine witnesses in IAF case.

Mushaal, who is wife of Yasin Malik, said in a statement on Tuesday that notorious Indian kangaroo courts had once again proven that Kashmiris had no rights in Indian Courts, as the CBI court passed a black order denying Hurriyat leader fundamental legal right to be presented physically in Jammu courts for cross examination. It is pertinent to mention here that the special court in Jammu ”closed” JKLF chief Yasin Malik’s right to cross-examine a prime witness in a 1990 case related to the killing of four IAF personnel after he refused to do so through video conference.

Mushaal went on to say that Yasin Malik had been jailed in notorious Delhi’s Tihar Jail in a fake and fabricated case and the shameful occupied authorities resorted to all unlawful and inhuman actions to silence the most powerful voice of the Kashmir freedom struggle. She lamented that despite RSS-inspired government all illegal and brutal measures to deny justice and fair trail to Yasin, the UN bodies and human rights organizations observed criminal silence on this world worst barbaric act.

Mushaal expressed her apprehension that Yasin Malik’s life was at risk as he was kept in death cell and did not provide him the much-needed life saving medicines despite fast deteriorating health condition. The chairperson urged the world’s powers, UN bodies and so-called human rights organizations to shun the duplicity and take tangible steps to ensure Yasin’s release from jail immediately. (APP)