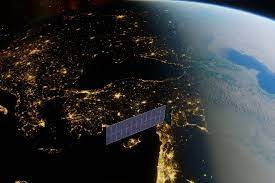 The tycoon had promised to bring the satellite internet network to the country in September as Iranian authorities imposed increasingly severe access restrictions, in a move activists called a campaign to limit information about protests that had broken out nationwide.

Starlink has more than 2,000 tiny satellites orbiting just a few hundred kilometers above Earth, providing internet access to users below.

The land-based terminals are then wired up to basic routers that create small wifi spots.

Earlier this year, controversial billionaire Musk gained hero status in Ukraine after sending thousands of Starlink terminals to the country in the days after Russia’s invasion.

Ukraine now has 20,000 of the small white receivers throughout the country.

Twitter head Musk’s Monday message was posted in response to a user whose video they said was taken in the “streets of Iran,” where there is now “more freedom for the women to choose whether they cover their hair or not.”

The post appeared to reference protests that swept Iran and the world after the September death of 22-year-old Iranian-Kurdish woman Mahsa Amini following her arrest in Tehran for an alleged breach of the country’s strict dress code for women.

Iran has unleashed a crackdown arresting around 14,000 people, according to the UN, and killing 469 protesters according to Norway-based Iran Human Rights (IHR).

The country’s top security body in early December gave a toll of more than 200 people killed, including security officers.

The authorities had already restricted access to Instagram and WhatsApp — until this autumn the last remaining unfiltered social media services — and then clamped down on apps like the Google Play Store as well as Virtual Private Networks (VPNs) that seek to circumvent local access restrictions.

Iranians have long used VPNs to access sites blocked in Iran — even government officials including the foreign minister have Twitter accounts despite the network being blocked in the country.