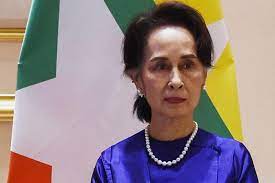 YANGON (AFP): A Myanmar junta court will give its verdicts on five remaining charges in the 18-month trial of jailed civilian leader Aung San Suu Kyi on Friday, a legal source told AFP.

Suu Kyi has been a prisoner since the military toppled her government in February last year, ending the Southeast Asian nation’s brief period of democracy.

The Nobel laureate, 77, has already been found guilty on 14 charges ranging from corruption to illegally importing walkie-talkies and breaching the official secrets act, and has been jailed for 26 years.

“Both sides gave final arguments today at court,” said a source with knowledge of the case on Monday who requested anonymity as they were not authorized to speak to the media.

“There will be a verdict on coming Friday (30th) December.”

Rights groups have slammed the trial as a sham, and on Wednesday the UN Security Council called on the junta to release Suu Kyi in its first resolution on the situation in Myanmar since the coup.

The resolution marked a moment of relative council unity after permanent members and close junta allies China and Russia abstained, opting not to wield vetoes following amendments to the wording.

The remaining five corruption charges Suu Kyi faces relate to the rental of a helicopter for a government minister, a case in which she had allegedly not followed regulations and caused “a loss to the state.”

Each carries a maximum jail term of 15 years. In previous corruption cases, the court has generally sentenced Suu Kyi to three years per charge.

Suu Kyi is currently imprisoned in a compound in the capital Naypyidaw, close to the courthouse where her trial is being held, and has been deprived of her household staff and pet dog Taichido.

Since the coup, she has largely disappeared from view, seen only in grainy state media photos from the bare courtroom.

The country has been plunged into turmoil, with some established ethnic rebel groups renewing fighting with the military in border areas, and the economy in tatters.

Dozens of “People’s Defense Forces” eschewing Suu Kyi’s strict policy of non-violence have also sprung up to battle the junta and have surprised the military with their effectiveness, analysts say.

There are almost daily killings of low-level junta officials or anti-coup fighters, with details murky and reprisals often following quickly.

Analysts say the junta may allow Suu Kyi to serve some of her sentence under house arrest while it prepares for elections it has said it will hold next year.

The military alleged there was widespread voter fraud during 2020 elections won resoundingly by Suu Kyi’s National League for Democracy party, although international observers said the poll was largely free and fair.

More than 2,600 people have been killed in the military’s crackdown on dissent, according to a local monitoring group.

Rights groups have accused the military of extrajudicial killings and launching air strikes on civilians that amount to war crimes.

The latest civilian death toll issued by the junta stands at over 4,000.