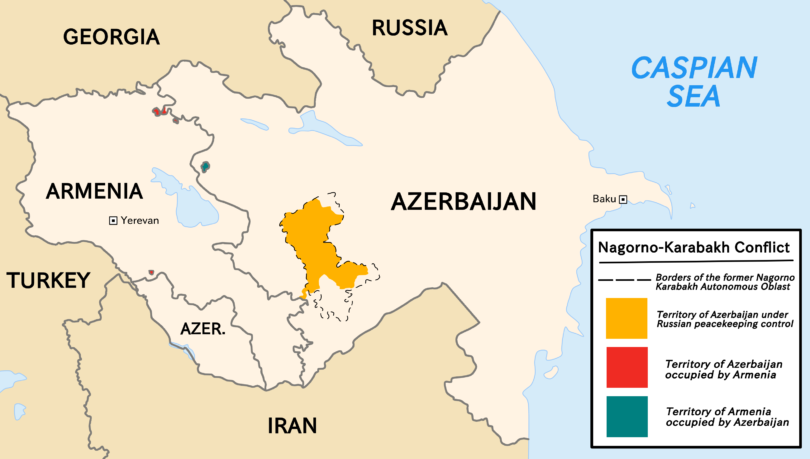 According to the media, Russia expressed concern over escalating tensions in its neighborhood between Armenia and Azerbaijan as a key road linking Armenia to the Yerevan-controlled disputed Nagorno-Karabakh enclave remained blocked for the consecutive fourth day. According to the details, a group of Azerbaijani environmental activists blocked the Lachin corridor, the only land route for people, goods, food, and medical supplies to reach Nagorno-Karabakh from Armenia across Azerbaijani territory.

The two former Soveit States and Caucasus Republics have reinvented the century-old dispute regarding jurisdiction over the Nagorno-Karabakh region that had been ruled by multiple dynasties with different administrative and geographical arrangements in the past. However, after the dissolution of the former Soviet Union, the two neighbors resorted to war to gain control over the autonomous region and have fought several wars over the past three decades. Historically, Nagorno-Karabakh is a part of Azerbaijan but home to over 120,000 ethnic Armenians who have sympathies toward Yerevan and intends to join Armenia. However, the region is surrounded by Azerbaijan’s territory and the Lachin corridor is the only land route that connects the landlocked Nagorno-Karabakh with Armenia. Recently, a group of Azerbaijani activists blocked the road in a peaceful standoff with Russian troops, who are deployed in the region as a peacekeeper since 2020.

The Armenian government has termed the closure of the passage a gross violation of the bilateral Treaty between Baku and Yerevan. Armenia said that the protesters have been dispatched by the Azerbaijani government in an attempt to block Armenia’s access to the region and called it hostage of population and the beginning of a humanitarian crisis in the region. On the other hand, the Azri government claimed that the protestors were, expressing their genuine frustration and rightful dissatisfaction of the Azerbaijani public with the illegal economic activity, looting of natural resources, and damage to the environment. Baku has accused Armenia of multiple breaches of bilateral agreements including illegal mining, laying of landmines, and looting of natural resources and minerals in the disputed territory.

In fact, global politics and regional rivalries have bitter facts and interesting colours and shades while belligerent nations commonly take unimaginable measures to exploit the others’ weaknesses to consolidate their occupation, economic and military position through the introduction of changes to the political, geographical, and demographic landscapes of a particular area or a disputed region. Historically, Russia had played the role of a Policeman in the entire Central Asia and South Caucasus regions after Mikhail Gorbachev dissolved the Ex. USSR in 1991. Previously, Moscow brokered a tri-party truce between warring nations and deployed over 5,000 Russian troops as peacekeepers that regulate traffic and entry into the Armenian control Nagorno-Karabakh region since 2020. Presently, Baku has accused Russian Troops of supporting Armenia and obstructing Azerbaijanis’ freedom of movement into the region, examining landmines laid by the Armenian Army and visiting mining sites in the area.

Armenia and Russia are close allies and previously, Moscow backed Armenia and Turkey supported Azerbaijan in the 2020 Karabakh war. Presently, Baku became annoyed by Moscow’s inclination toward Yerevan and sharply drifted toward the west. The newest shift in regional politics had caused tremendous pressure on the Kremlin, which favors the status quo while western nations are glad over the eruption of upheaval in Moscow’s backyard. Armenia and Azerbaijan both demand full control over the disputed territory which is not possible. Earlier, the Ukrainian war ruined the entire world, now, another catastrophe is likely to come through the newest campaign.