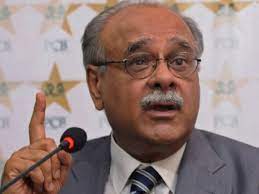 Pakistan Cricket Board Chairman Najam Sethi said while talking to the media in Lahore that there was no plan to change the name of Qaddafi Stadium.

To a question put to him about the change of the name of the stadium, Sethi said: “When I first joined the PCB, some people urged me to change the name of Gaddafi Stadium and name it after Abdul Sattar Edhi. I tried to adhere to the same idea.”

He added: “[However] I believe that the historical names should remain the same, for our memories are connected with them.”

It merits a mention here that Najam Sethi, in his previous term as PCB chairman, had proposed that the name of Gaddafi Stadium, Lahore be changed to Edhi Stadium in order to pay homage to the late philanthropist.