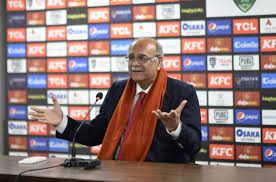 KARACHI: Chairman of Pakistan Cricket Board (PCB) Management Committee Najam Sethi has said that his top Cricketing priorities are the restoration of the PCB constitution of 2014 with amendments if any.

He said that the revival of regional and departmental crickets was also part of his advanced approach and vowed to constitute a good team and draft winning strategies for staging the best cricket matches on the grounds. He stated this while talking to media persons at the National Bank Cricket Arena, formerly known as the National Stadium Karachi, here on Monday.

The PCB management committee’s chief said that the committee had full powers and it had been provided with a four-month period to function. He said that the management committee would be dissolved as the constitution of 2014 was re-established and all elected representatives were ready. He said that, later, the Prime Minister would recommend nominations and then elections would be announced.

Sethi said that for last four years he did not make any comment regarding two previous PCB chairmen. ‘I was of the view that they must be provided space to work as the mistakes are part of life.’

He said that in his previous tenure as a PCB chairman, he had told Indians if they would not come to play in Pakistan then we would also not come to you.

Replying to another question on Niaz Stadium, he hoped that they would find a way for Niaz Stadium restoration with Sindh government. (APP)