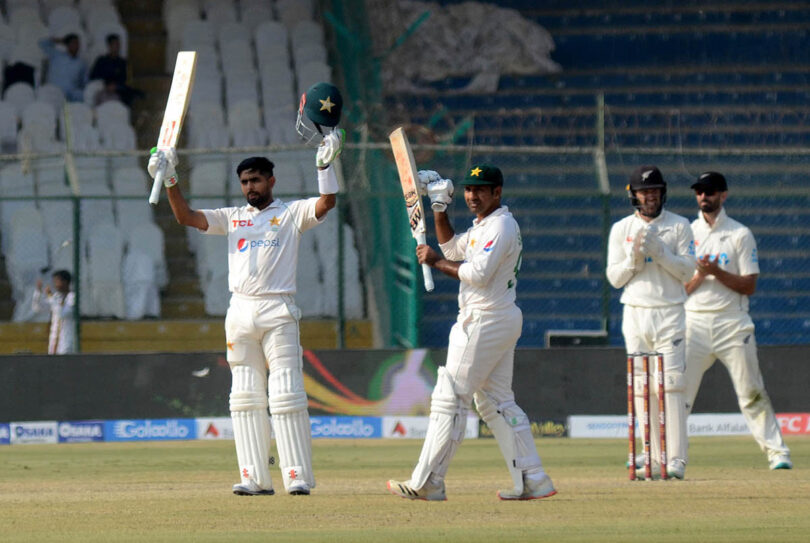 KARACHI: A ninth Test century from Babar Azam and a landmark comeback innings from Sarfaraz Ahmed headlined day one of Pakistan’s first Test against New Zealand, with the hosts posting 317 for 5 on the back of their 196-run fifth-wicket stand.

The pair came together when Pakistan were in an uncomfortable position of 110 for 4 before lunch, but batted nearly through till stumps, surviving for almost two full sessions. While Babar’s unbeaten 161, that now pushes his Test average to more than 50, was the highlight of the day, equally memorable was Sarfaraz’s 86 in his first Test outing in nearly four years and his very first on home soil.

The day, however, had begun in disastrous fashion for Pakistan after they had chosen to bat. Abdullah Shafique and Shan Masood were both stumped off Ajaz Patel and Michael Bracewell respectively early on, the very first time a Test began with the first two wickets being stumpings. At the time, the new ball was turning on the fresh Karachi pitch that had some moisture, and both fell prey by coming down the track. When Imam-ul-Haq fell for 24 at the stroke of drinks in the first hour, the score read 48 for 3 and Pakistan appeared to have gifted their toss advantage away. However, Babar and Saud Shakeel did make a brief recovery in a 62-run stand to drag Pakistan past hundred. The latter, though, fell for 22 just one over before lunch. That fourth wicket made the opening session truly belong to New Zealand, but little did the visitors know that they would have to wait for almost five hours for their next moment of celebration.

Early on in Babar’s innings, he was given a life at 12 when Daryl Mitchell dropped him at first slip, and there was a potential run-out chance first over after lunch, but apart from that, the Pakistan captain dominated the New Zealand bowlers. He made full use of a surface that turned benign after a tricky first hour to power on to his century, reaching the triple figures with a six over deep midwicket.

Babar scored a total of 83 runs in front of square on the leg side, making full use of the balls turning in from Bracewell, the deliveries tailing in from Tim Southee, and the unsuccessful leg-side line offered by Neil Wagner. His most productive shot, the flick, earned him 56 runs in an innings that has seen 15 fours and the solitary six thus far.

Even though Babar began his innings by staying inside the crease and playing off the back foot, he moved onto the front foot as he looked more assured after the degree of turn dwindled. Barring the occasional ball that stayed low, Babar could trust the pitch that did not offer extravagant bounce, and in Sarfaraz’s company, dominated the second session.

As for Sarfaraz, playing his first Test since January 2019 and his very first at home, it was the sweep that was most productive early on, using the shot against the spinners prodigiously even when someone like Patel got the ball to turn away from him. Sarfaraz’s innings, though, was a tad streaky, getting edges down to deep third when chasing wide deliveries from the seamers, or getting squared up by good-length deliveries that held their line.

He also overcame an injured hip – that needed the physio’s attention – when he was in his forties to reach his 19th Test half-century, and the longer he batted thereafter, the injury appeared to bother him less. While the Karachi pitch did appear docile, so did New Zealand’s attack the bigger the partnership grew. Southee got the ball to reverse, but the angle often took the ball down the leg side that allowed both batters to find runs at fine leg. Wagner paid the price for straying too much on leg from over the stumps with the two batters not troubled by his leg-theory plan.

Ish Sodhi, Bracewell and Ajaz were comfortably tackled too as the ball got old, despite New Zealand applying pressure with multiple fielders under the helmet. In all, the duo added 109 runs between lunch and tea. After tea, the older, softer ball meant the rate of run scoring dropped for Pakistan. The state of play became sedate, and the defensive shots came into play once more. (Cricinfo)