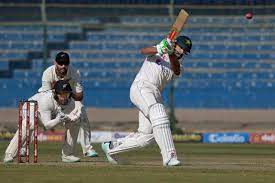 Henry made a career-best unbeaten 68 off 81 balls while Patel also notched his test-best of 35 as they added 104 for the 10th wicket and propelled New Zealand to 449 on Day 2.

Both Henry and Patel then struck early blows and captain Babar Azam was run out in a bizarre mix-up with Imam-ul-Haq in the final session before Pakistan struggled to reach 154-3 at stumps.

Imam was unbeaten on 74 and Saud Shakeel, who took nearly an hour before getting his first run off his 42nd ball and also survived a dropped catch, was not out on 13.

Fast bowler Henry, playing his first test since last June, induced a top-edge of Abdullah Shafique’s (19) mistimed pull shot and Patel got rid of Shan Masood (20) to leave Pakistan in trouble at 62-2 going into the final session.

Imam reached his fifty with a straight six over the head of offspinner Michael Bracewell in the last session, but New Zealand still managed to slow down Pakistan’s progress and leads by 295 runs.

But Henry and Patel stretched New Zealand in a dominating aggressive century-stand against both pace and spin.

Henry and Ajaz defied Pakistan for 1 1/2 hours as Pakistan couldn’t wrap up New Zealand’s innings despite using all five of its bowling options against the last-wicket pair which took the visitors to 433-9 by lunch. Abrar finally ended Pakistan’s frustration when he had Patel caught of a mistimed sweep soon after lunch.

Earlier, Blundell, 30 overnight, went on to complete his fifty off 103 balls with six fours before he was clean bowled for 51 by Abrar off a delivery that spun away from the righthander and also kept a bit low.

Tim Southee (10) successfully overturned an lbw ruling against Hasan Ali but got stumped by Abrar before Patel hung in with Henry, who replaced Neil Wagner in the only change New Zealand has made from the team that drew the first test.

Hasan couldn’t get a success in his comeback to test cricket since last July as he bowled 21 wicketless overs for 72 runs.

Henry showed a lot of aggression against the pace, lifting Hasan and Naseem for big sixes over mid-wicket and smashing eight boundaries. Naseem went for an unsuccessful lbw TV referral when Henry was on 27 before Henry latched onto any loose delivery with perfection.

Patel was equally good against the spinners, hitting four boundaries as both showed plenty of determination before New Zealand finally got bowled out.

Shafique showed early aggression against Tim Southee and Henry and struck four boundaries before he played a reckless pull and holed out to deep mid-wicket.

Masood smashed three fours in Patel’s one over but tried an overambitious cut against the leftarmer in the same over that saw him giving a regulation catch to Devon Conway at point as New Zealand made early inroads.

Babar, who topped the scoring chart in 2022 with 1,184 runs in test matches, was shaping up well for his 24 off 41 balls but Imam declined the third run after initially taking a few steps out of his crease and both batters ended up at the non-striker’s end.

Shakeel could have been out before he had scored, but wicketkeeper Blundell couldn’t hold onto an edge off Bracewell.