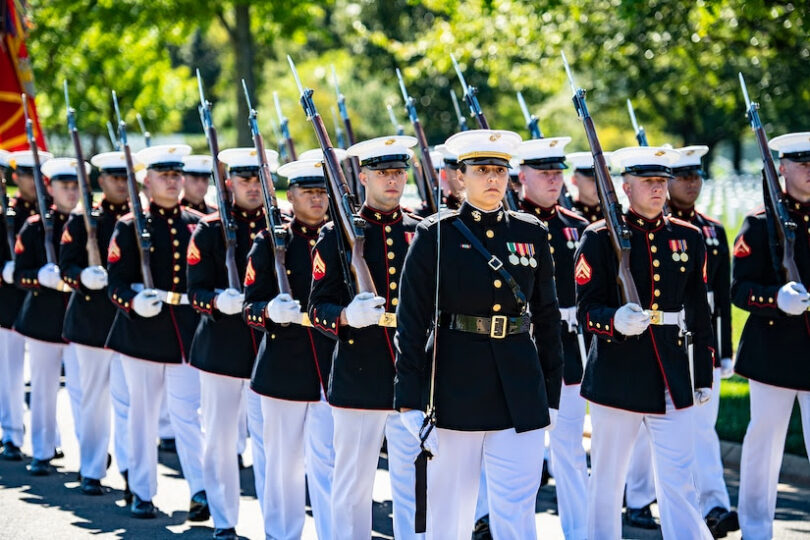 WASHINGTON: Marine Corps Capt. Kelsey M. Hastings spent the first few years of her career as an artillery officer. Little did she know that within six years, she would become the first woman to command the Marine Corps Silent Drill Platoon for its 2023 season.

Hastings, 28, graduated from the Naval Academy in May 2017 and immediately began serving as a Marine Corps field artillery officer with the 1st Battalion, 12th Marines in Hawaii. In 2020, she moved to Washington, D.C, to serve at Marine Barracks Washington, a registered national historical landmark that supports ceremonial and security missions. There, she was required to go through Ceremonial Drill School to learn the rigorous fundamentals of the ceremonial mission. Hastings served as a marching platoon commander and a marching company executive officer before being selected as the 2023 Silent Drill Platoon commander.

The highly disciplined platoon performs during historic Friday Evening Parades at the barracks and Tuesday Sunset Parades at the Marine Corps War Memorial, along with other ceremonies throughout the nation from May to August. The 24-Marine platoon’s performances with their 10-pound M1 Garand rifles are precise and calculated – and they’re all done without verbal cadence or commands.

As Hastings took over the reins of the platoon, she talked to us about this special mission.

What’s so special about the Silent Drill Platoon?

We’re given the opportunity to represent the Marine Corps to the public. We get to go around the country to organizations and schools that request us to be there to show the world what the Marine Corps is — that we are professionalism and how we care for attention to detail.

There have been a lot of female “firsts” in the military over the past few decades. What are your thoughts on that designation?

At the end of the day, I just I feel honored to be a potential role model for both men and women who want to be a Marine. I wouldn’t necessarily say I take that title as a big honor. Yes, I am the first, but at the same time, I’m team commander and I’ve done this before. So, I want to do my best for my Marines and the mission. It’s an honor, but it’s not the reason that I’m here. It’s not the reason I’m leading. I want to lead Marines and be selfless in that regard.

Tell me about Ceremonial Drill School. Do you get chosen for it?

All officers and staff non-commissioned officers who get stationed at Marine Barracks Washington go through Ceremonial Drill School. It’s something we all share and work through. Then, once you graduate, you go off to your job. After I graduated, I became first platoon commander in Bravo Company . I did that for one season. Then I was chosen to be the Bravo Company executive officer, and I just got selected for Silent Drill Platoon. It’s a command-selected position, and it’s really an honor.

What is the hardest part of leading a drill platoon?

Personal discipline. I never thought standing still for so long would be as hard and exhausting as it is. Also, there are all the minor drill movements and making sure that my appearance is perfect, from the uniform to how I’m standing to how I’m executing things — on top of making sure that everyone’s taken care of in my platoon and the mission’s being met. It’s doing that part to perfect what I’m presenting. That is definitely something that I constantly get to improve on — making sure everything is to the Marine Corps’ standards.

Tell me about the 24 Marines in the platoon. How are they chosen?

Actually, today is the first day of our silent drill school. We had a fair amount of Marines from last season who moved, got stationed into the fleet or are getting out of the Marine Corps, so we have to replace them. For the next three weeks, we will have silent drill school, and we will select the people to replace those who left. Then in February, we’ll be going to Yuma, Arizona, to train further to develop our routine and skills. Then, at the end of Yuma — we call it Challenge Day — where everyone basically does an evaluation, and the best top 24 get selected.

Some of the Marines who were in last season, they’re working right now to make sure that they are up on their skills. It’s a constant thing where you can’t become complacent — you can’t think that you’ve made it. We’re all here to keep improving and working together to create a performance that is phenomenal and memorable.

It’s long days. At silent drill school, we start around 6 or 6:30 a.m. and end just before dinner. We’ll stop for breaks periodically, but the whole day is still — it’s a lot. In Yuma, we eat breakfast, then we start working, stop for lunch, keep working, stop for dinner, keep working, and then just rinse and repeat each day. Even outside of when we’re at work, I have some Marines who keep on working on their rifle skills, which is just a testament to how phenomenal these junior Marines are and how dedicated they are to the platoon and the mission. It takes a large amount of time to get these guys to a place that we feel comfortable presenting our performance to people.

What have you found to be the hardest skill to master?

We don’t jump directly into ‘Okay, spin the rifle four times.’ We do it step by step by step — crawling through the whole thing. By the end, everyone’s like, ‘Okay, can we get to the spins?’ But we’ve got to do all those beginning steps before we get there. And it’s all dependent on the person. Some people grasp certain things faster than others. There’s not generally one thing that is something that people struggle with. It’s all dependent on the Marine and what their natural skill type is.

As commander, what would you like to bring to the position?

I think that because of COVID-19, we weren’t at the forefront of people’s minds. So, I really want to get our name and our performance out there around the country to different organizations and kids in high schools – people who don’t normally get the opportunity to come to Marine Barracks Washington and see a parade.

When I was a kid, I got the opportunity to see the Silent Drill Platoon perform in Seattle. My family never would have been able to come out here to the barracks to see it. So, giving that to the public — taking our performance to them allows them to see what we do. I stand there and watch in awe of what they do, and I’m sure that the public does that as well.

What do you enjoy most from the performances?

The crowd and the Marines getting to see that their hard work is appreciated. They spend so many hours , and so getting to see little kids watching in awe as they’re throwing the rifles — I think that’s a really rewarding feeling.

What do you see yourself doing after your year commanding the platoon is over?

I’m excited about the next few years. I think there’s going to be some really amazing opportunities in leadership and in being with the Marines. I’m up for orders to go back to the fleet in the summer of 2024. I want to be a battery commander, really, really badly. Then from there, I don’t know. I’m kind of taking it one duty station at a time. So, ask me again in the winter of 2024!