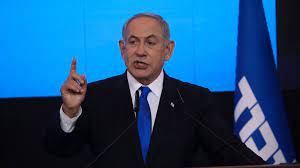 JERUSALEM (AP): Benjamin Netanyahu’s incoming hard-line government put West Bank settlement expansion at the top of its list of priorities on Wednesday, vowing to legalize dozens of illegally built outposts and annex the occupied territory as part of its coalition deal with its ultranational allies.

The coalition agreements, released a day before the government is to be sworn into office, also included language endorsing discrimination against LGBTQ people on religious grounds, as well as generous stipends for ultra-Orthodox men who prefer to study instead of work.

The package laid the groundwork for what is expected to be a stormy beginning for Netanyahu’s government and could put it at odds with large parts of the Israeli public and Israel’s closest allies abroad.

Its lengthy list of guidelines was led by a commitment to “advance and develop settlement in all parts of the land of Israel,” including “Judea and Samaria,” the biblical names for the West Bank.

Israel captured the West Bank in 1967 along with the Gaza Strip and east Jerusalem. The Palestinians seek the West Bank as the heartland of a future independent state. In the decades since, Israel has constructed dozens of Jewish settlements there that are now home to around 500,000 Israelis living alongside around 2.5 million Palestinians.

Most of the international community considers Israel’s West Bank settlements illegal and an obstacle to peace with the Palestinians. The United States already has warned the incoming government against taking steps that could undermine the dwindling hopes for the establishment of an independent Palestinian state.

Netanyahu’s new government — the most religious and hard-line in Israel’s history — is made up of ultra-Orthodox parties, a far-right ultranationalist religious faction affiliated with the West Bank settler movement and his Likud party. It is to be sworn in on Thursday.

Several of Netanyahu’s key allies, including most of the Religious Zionism party, are ultranationalist West Bank settlers.

In the coalition agreement between Likud and Religious Zionism, Netanyahu pledges to legalize wildcat settlement outposts considered illegal even by the Israeli government. He also promises to annex the West Bank “while choosing the timing and considering the national and international interests of the state of Israel.”

Such a move would alienate much of the world, and give new fuel to critics who compare Israeli policies in the West Bank to apartheid South Africa.

The deal also grants favors to Itamar Ben-Gvir, a far-right politician who will be in charge of the national police force as the newly created national security minister.

It includes a commitment to expand and vastly increase government funding for the Israeli settlements in the divided West Bank city of Hebron, where Ben-Gvir lives among a tiny settler community amid tens of thousands of Palestinians.

That agreement also includes a clause pledging to change the country’s anti-discrimination laws to allow businesses to refuse service to people “because of a religious belief.” The legislation drew outrage earlier this week and concerns about impingement of LGBTQ rights. Netanyahu has said he will not let the law pass, but nonetheless left the clause in the coalition agreement.

In an op-ed published in the Wall Street Journal, Smotrich said there would be no “changing the political or legal status” of the West Bank, indicating that annexation would not immediately take place.

But he leveled criticism at the “feckless military government” that controls key aspects of life for Israeli settlements — such as construction, expansion and infrastructure projects. Smotrich, who will also be finance minister, is expected to push hard to expand construction and funding for settlements while stifling Palestinian development in the territory.

Netanyahu is returning to power after he was ousted from office last year after serving as prime minister from 2009 to 2021. He will take office while on trial for allegedly accepting bribes, breach of trust and fraud, charges he denies.

Netanyahu’s partners are seeking widespread policy reforms that could alienate large swaths of the Israeli public, raise tensions with the Palestinians, and put the country on a collision course with the U.S. and American Jewry.

The Biden administration has said it strongly opposes settlement expansion and has rebuked the Israeli government for it in the past.

Earlier on Wednesday, Israel’s figurehead president expressed “deep concern” about the incoming government and its positions on LGBTQ rights, racism and the country’s Arab minority in a rare meeting called with Ben-Gvir, one of the coalition’s most radical members.

President Isaac Herzog met with Ben-Gvir after members of his party this week called for the legalization of discrimination against LGBTQ people based on religious belief.

Herzog’s office said the president urged Ben-Gvir to “calm the stormy winds and to be attentive to and internalize the criticism” about the incoming government’s stance on LGBTQ issues, Palestinian citizens of Israel, and a bill to remove a ban on politicians supporting racism and terrorism from serving in the Knesset, Israel’s parliament.

The government platform also mentioned that the loosely defined rules governing holy sites, including Jerusalem’s flashpoint shrine known to Jews as the Temple Mount and to Muslims as the Al-Aqsa Mosque compound, would remain the same.

Ben-Gvir and other Religious Zionism politicians had called for the “status quo” to be changed to allow Jewish prayer at the site, a move that risked inflaming tensions with the Palestinians. The status of the site is the emotional epicenter of the decades-long Israeli-Palestinian conflict.