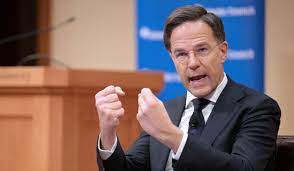 WASHINGTON (AP): Netherlands Prime Minister Mark Rutte said Tuesday that his country plans to “join” the US and Germany’s efforts to train and arm Ukraine with advanced Patriot defense systems.

Rutte signaled the Netherlands’ intentions at the start of a White House meeting with President Joe Biden. It remains unclear if the Dutch will ultimately send Patriot systems, take part in training or offer some other assistance related to deployment of Patriots. The Dutch defense ministry said that Ukraine has asked the Netherlands to provide “Patriot capacity.”

“We have the intention to join what you are doing with Germany on the Patriot project,” Rutte told Biden. “I think that it’s important we join that.”

Ukrainian President Volodymyr Zelensky said in his nightly address that the Netherlands had agreed to send Ukraine a Patriot battery. “So, there are now three guaranteed batteries. But this is only the beginning. We are working on new solutions to strengthen our air defense,” Zelensky said.

Rutte, who said he also spoke with German Chancellor Olaf Scholz on Tuesday about the potential assistance, was more vague about the commitment in his public comments. He told Dutch broadcaster NOS that his government is in talks about what exactly it can contribute. The Dutch military has four Patriot systems, one of which is not in service, according to the defense ministry.

“The idea is not only training, but also equipment,” Rutte told NOS. He added that the Dutch military is now reviewing “what exactly we have, how can we ensure that it works well with the American and German systems.”

Rutte spoke about the potential assistance as Ukrainian troops arrived at Oklahoma’s Fort Sill Army base to begin training on operating and maintaining the Patriot missile defense system. The Patriot is the most advanced surface-to-air missile system the West has provided to Ukraine to help repel Russian aerial attacks.

“Training has begun,” Pentagon spokesman Air Force Brig. Gen. Pat Ryder said. “As we’ve talked about before, that training will last for several months, and train upwards of 90 to 100 Ukrainians on use of the Patriot missile system.”

The administration has been trying to get the Netherlands on the same page since the US Commerce Department announced in October new export controls aimed at China. The restrictions are intended to limit China’s ability to access advanced computing chips, develop and maintain supercomputers, and make advanced semiconductors.

“Together we’re working on how to keep a free and open Indo Pacific, and quite frankly the challenges of China,” Biden said at the start of the meeting.

Administration officials have reasoned that the export restrictions are necessary because China can use semiconductors to create advanced military systems including weapons of mass destruction; commit human rights abuses; and improve the speed and accuracy of its military decision making, planning and logistics.

Slowing Beijing’s access, however, will take plenty of help from allies for the US export controls to have maximum impact. The Netherlands-based tech giant ASML is a major manufacturer of lithography machines that design and produce semiconductors. China is one of ASML’s biggest clients.

CEO Peter Wennink played down the impact of the US export control regulations soon after the administration unveiled them last fall. ASML said last year that it expected company-wide 2022 sales to be around 21 billion euros.

The US has also been in talks with Japan on tougher export restrictions to limit the sale of semiconductor manufacturing technology to China. Rutte’s visit comes after Biden hosted Japanese Prime Minister Fumio Kishida last week for talks.

The US and Japan, in a joint statement following meeting, said the two sides agreed to “sharpen our shared edge on economic security, including protection and promotion of critical and emerging technologies.”

“We hope the relevant countries will do the right thing and work together to uphold the multilateral trade regime and safeguard the stability of the global industrial and supply chains,” he said. “This will also serve to protect their own long-term interests.”

Biden praised Netherlands as one of the United States “strongest” allies, one that’s proven “very, very stalwart” in its support for Ukraine since Russia launched in its invasion in February. The Netherlands has committed about $2.7 billion (2.5 billion euros) in support for Ukraine this year. The money will be spent on military equipment, humanitarian and diplomatic efforts.

The Netherlands providing Ukraine with Patriot assistance — whether the weapons systems, missiles or training — would be a major move for the NATO ally.

The training of Ukraine forces now underway in Oklahoma is to focus, in part, on how to maintain the battery that will be sent by the US to Ukraine once training is complete. Each system has multiple components, including a phased array radar, a control station, computers and generators, and typically requires about 90 soldiers to operate and maintain, however only three soldiers are needed to actually fire it, according to the Army.

Some of the ongoing maintenance support, once the Patriot is on the battlefield, will be done remotely, Ryder said.

The Dutch prime minister, for his part, praised Biden for leading the international effort to back Ukraine.

“I am convinced history will judge in 2022 if the United States had not stepped up like you did things would have been very different,” Rutte said.

The two leaders also discussed plans for the Summit for Democracy, which they are co-hosting with Costa Rica, South Korea and Zambia in late March.

Biden hosted the inaugural democracy summit in December 2021. The administration billed it as the start of a global conversation about how best to halt the backsliding of democracy.