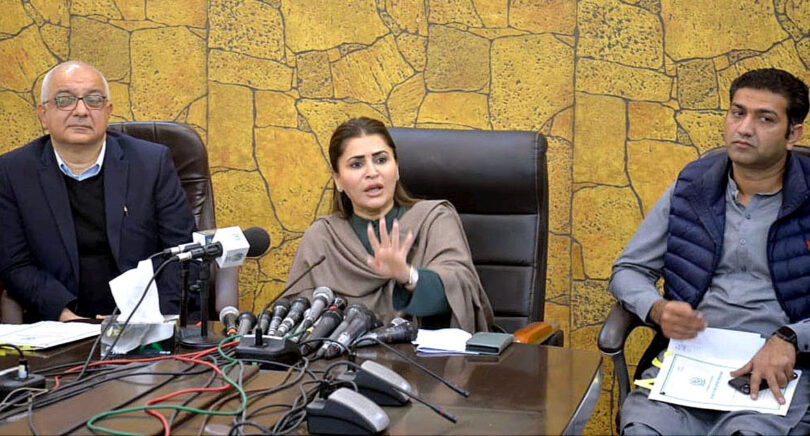 KARACHI: “A new payment method to secure and expand avenues of investment and saving for BISP beneficiaries.”

Federal Minister for Poverty Alleviation and Social Safety and Benazir Income Support Program (BISP)- Chairperson Shazia Atta Marri, while speaking at a Press Conference highlighted that the focus of the Conference would be on BISP. The conference was to lay focus on the introduction of a new payment mechanism for BISP.

BISP got its legal framework in 2010 with all its legislations and a legal status. Pakistan is a developing nation, however, with its economic challenges, Pakistan still has a unique program like BISP. It’s the most popular in the region, and also revered in the UN on a global level. BISP currently facilitates and benefits above 8 million families. A new Payment mechanism is in need of adoption, program started in 2010, back when money order was the way to transfer funds. Then it moved to pilot program mechanism, that initiated the Benazir debit card.

Moving on and rectifying the flaws of the debit card system, in 2016 a biometric verification was piloted and officially launched. With its pros, came the cons and we faced extreme challenges during the floods, the role of middleman, delayed payments, no concept of saving as all the money must be extracted at the same time. With all these loopholes, and increasing challenges for women to extract payments through biometric verification method, Madam Shazia Marri and her team decided to devise a method to undo the previous payment structures and devise a plan that will work.

Through this program, women who are direct beneficiaries of BISP, can now be empowered. She can be an owner of a bank account in her own capacity. She can manage savings, she can use the finances to initiate any business prospect. This method not only brings about financial literacy, but also ensures social inclusion of millions of women, benefiting from BISP. For this new mechanism to work, the Federal Minister stated that there will first be a pilot program, along with a few Banks in different regions, on a small scale, to test whether it can be sustained as a full fledged program.

The expansion won’t be overnight, it will be taken up only after the pilot is run, and whatever necessary inadequacies that may arise while it’s put in place, they must be rectified in the final plan.

BISP has long been known to encourage individuals to move towards registering and making CNICs, that were a prerequisite before the women who are beneficiaries of BISP, could extract the funds. Thus, BISP has already been a catalyst in creating awareness and encouraging the populous to document and register itself, with CNICs, Birth certificates etc. BISP doesn’t simply provide financial assistance, it also impacts social change, with

creating and spreading certain habits that reinforce the concept of social responsibility.

BISP, has been granted 70 billion Rupees by the Prime Minister Shahbaz Sharif, to assist the flood affected areas. With the immense challenges that The Ministry faced, along with the on ground teams, BISP was present on the field, working tirelessly in providing the required assistance. She thanked Sindh Information Minister, Chief Minister Sindh, and relevant departments of Sindh Government for working as a liaison with the Federal Government and the BISP teams that were tasked with such a grave and crucial responsibility of utilising and handing over the resources allocated by the the PM.

Federal Minister Shazia Marri said, Due to the Donor Conference in Geneva, a huge amount of funds in assistance were promised, and she was thankful to all stakeholders and Government Officials and departments, who played a crucial part in enabling BISP to play an integral part in being the front runners of flood relief assistance. She said climate change had wreaked havoc on Pakistan this summer and affected more than 33 million people.

With Pakistan only contributing 0.1% towards the carbon emissions, yet it had to bear the brunt of its destruction, due to the negligence shown by developed and industrial nations who have immense carbon footprints. Madam Shazia Marri further said by taking the example of recent floods in Pakistan, it was important to understand that climate change was not just an environmental issue, but a threat to health, livelihood, agriculture, peace and security and the overall economy of the world.

In conclusion, she expressed that BISP has thus been in place, standing round the clock, for Flood relief and rehabilitation. She said that the looming flaws that were slapped onto the recent Ministry, by the inefficient handling of the program by the previous Government, the current Government and Federal Minister for BISP, had already reversed the exclusion of 0.8 million beneficiaries who were thrown out of the program on unfair basis. The current BISP handlers have to outdo and undo the mismanagement and unfair disbursement of funds carried out by the previous Government, while it is also tasked with keeping in with the current technological advancements and social responsibility.