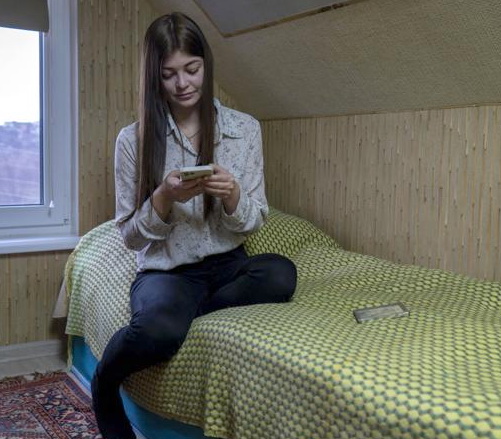 KYIV (AP): Alina Kapatsyna often dreams about getting a phone call from her mother. In those visions, her mother tells her that she’s coming home. Men in military uniforms took 45-year-old Vita Hannych away from her house in eastern Ukraine in April. She never returned. Her family later learned that Hannych, who has long suffered from seizures because of a brain cyst, is in custody in the Russian-occupied part of the Donetsk region.

Kapatsyna told The Associated Press that it remains unclear why her mother — ”a peaceful, civilian and sick person” who has never held a weapon — was detained. Hannych is one of hundreds — and perhaps thousands — of Ukrainian noncombatants believed to be held by Russian forces for months following their invasion. Some are deemed to be prisoners of war, even though they never took part in the fighting. Others are in a sort of legal limbo — not facing any criminal charges or considered to be POWs. Hannych was wearing only a sweatsuit and slippers when she was seized by Russian forces occupying her village of Volodymyrivka several weeks into the Feb. 24 invasion. It is still under Moscow’s control.

Her family initially thought she would come home shortly. Russian forces were known to detain people for two or three days for “filtration” and then release them, Kapatsyna said, and Hannych had no military or law enforcement connections. When she wasn’t released, Kapatsyna and her 70-year-old grandmother started a search. At first, letters and visits to various Russian-installed officials and government bodies in the Donetsk region yielded no results. “The answers from everywhere were the same: ‘We did not take her away.’ Who took her then, if no one took her?” said Kapatsyna, who left the village in March for the Ukrainian-controlled city of Dnipro.

Then, they finally got some clarity: Hannych was jailed in Olenivka, another Russian-controlled city, according to a letter from the Moscow-installed prosecutor’s office in the Donetsk region. The jail staff told Kapatsyna’s grandmother that Hannych was a sniper, allegations her family deems absurd, given her condition. Medical records seen by the AP confirmed that she had a brain cyst, as well as “residual encephalopathy” and “general convulsive attacks.” Anna Vorosheva, who spent 100 days in the same facility as Hannych, recounted squalid, inhumane conditions: putrid drinking water, no heat or showers, having to sleep in shifts and hearing new prisoners screaming from being beaten.

Vorosheva, 46, said she wasn’t told why she was detained, aside from “smirks and jokes about Nazis” — a reference to Russia’s false claims that what it calls its “special military operation” was a campaign to “denazify” Ukraine. She also said the staff told her: “Be happy we’re not beating you.” Donetsk authorities labeled Hannych a POW and recently told the family she is imprisoned in the occupied city of Mariupol. It remains unclear when, if at all, she could be released. Ukraine’s top human rights organization, Center for Civil Liberties, has requests concerning around 900 civilians captured by Russia since the war began, with more than half still in custody.

Dmytro Lubinets, Ukraine’s human rights envoy, put the number even higher and said Friday that his office received inquiries concerning more than 20,000 “civilian hostages” detained by Russia. Russian lawyer Leonid Solovyov told the AP he has amassed more than 100 requests concerning Ukrainian civilians. He said he was able to help 30-40 confirm the person they looked for was in Russian custody without any legal status — just like his client, Mykyta Shkriabin. The student from northeastern Ukraine’s Kharkiv region was detained by Russia’s military in March and has been held ever since without charges or any legal proceedings.

Shkriabin, then 19, was sheltering from the fighting in a basement with his family, according to his mother, Tetiana. During a break, he went out for supplies — and never returned. Tetiana Shkriabina told the AP that she learned from witnesses that Russian soldiers seized him. Months later, Solovyov got confirmation from Russia’s Defense Ministry that Shkriabin was detained for “resisting the special military operation.” There is no such offense on the books in Russia, Solovyov said, and even if there was, Shkriabin would have been formally charged and investigated, but that hasn’t happened. The ministry refused to disclose his whereabouts.

Moreover, when Solovyov filed a complaint to Russia’s Investigative Committee contesting the detention, it confirmed that there are no criminal probes opened against Shkriabin, that he is neither a suspect, nor an accused. Shkriabin, who turned 20 in captivity, hasn’t been labeled a POW, the lawyer said, adding: “His legal status is simply a hostage.” Russia’s Defense Ministry and the Interior Ministry didn’t respond to requests for comment. Other cases are eerily similar to those of Shkriabin and Hannych. In May, Russian forces detained information technology specialist Iryna Horobtsova in the southern city of Kherson when it was occupied by Moscow. They raided her apartment, seizing a laptop, two cellphones and several flash drives, and then took her away, according to her sister, Elena Kornii. They promised her parents that she would be home that evening — but it didn’t happen.
Horobtsova remained in the city and spoke out against the war on social media before she was detained, Kornii said. She had attended anti-Russia protests and also helped residents by driving them to work or finding scarce medications.

“She hasn’t violated any Ukrainian laws,” Kornii said, noting that her sister had nothing to do with the military. Horobtsova’s lawyer, Emil Kurbedinov, said he believed that Russian security forces were carrying out “purges of the disloyal” in Kherson. He learned from Russia’s Federal Security Service, or FSB, that she was still in custody. The Interior Ministry in Moscow-annexed Crimea told him that Horobtsova was in a detention center there. When Kurbedinov tried to visit her, officials refused to acknowledge having any such prisoner.

Dmytro Orlov, mayor of the occupied city of Enerhodar in the Zaporizhzhia region, describes the fate of his deputy the same way — “an absolutely arbitrary detention.”
Ivan Samoydyuk was picked up by Russian soldiers shortly after they seized the Zaporizhzhia Nuclear Power Plant in March, and no charges have been filed against him, Orlov said. “We’re not even sure if he’s alive!” the mayor said. “If we can’t get clarity from the Russians about the fate of a deputy mayor, imagine the fate of ordinary Ukrainian civilians.” Mykhailo Savva of the Expert Council of the Center for Civil Liberties said the Geneva Conventions allow a state to detain civilians temporarily in occupied areas, but “as soon as the reason that caused the detention of this civilian disappears, then this person must be released.”

“No special conditions, no trades, just release,” Savva said, noting that civilians can’t be declared POWs under international law. International law prohibits a warring party from forcibly moving a civilian to its own territory or territory it occupies, and doing so could be deemed a war crime, said Yulia Gorbunova, a senior researcher with Human Rights Watch. POWs can be exchanged, but there is no legal mechanism for swapping noncombatants, Gorbunova said, complicating efforts to free civilians from captivity. Since the war began, however, Kyiv has been able to bring some home. Andriy Yermak, the head of Ukraine’s presidential office, said on Jan. 8 that 132 civilians were brought back from Russian captivity in 2022.

Lubinets, the Ukrainian human rights ombudsman, met this month with his Russian counterpart, Tatyana Moskalkova. He said he gave Moskalkova lists of some of the 20,000 Ukrainian civilians he said were held by Russia, and “the Russian side agreed to find out where they are, in what condition and why they are being held.” After getting such information, the question “of the procedure for their return” will be raised, Lubinets said.