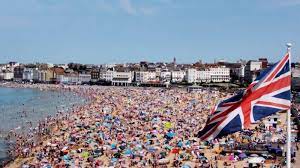 The Met Office confirmed Thursday that 2022 was the country’s hottest year on record with an average temperature of 10.03 degrees Celsius.

Since records began in 1884, the 10 warmest years have occurred from 2003, the meteorological service said, confirming trends reported elsewhere in Europe this winter.

“The results showed that recording 10 degrees Celsius in a natural climate would occur around once every 500 years, whereas in our current climate it could be as frequently as once every three to four years,” he said.

By the end of the century, without steeper cuts to carbon emissions, “a UK average temperature of 10 degrees Celsius could occur almost every year”, Christidis added.

The Met Office report was released ahead of a broader study on January 10 by Copernicus, the European Union’s planetary observation programme, into EU and global weather patterns last year.

Earth has warmed more than 1.1 degrees Celsius since the late 19th century, with roughly half of that increase occurring in the past 30 years, the World Meteorological Organization said in a report in November.