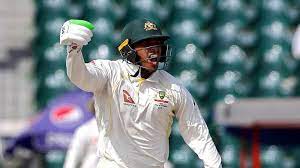 SYDNEY (AFP): Steven Smith passed a Don Bradman landmark to claim his 30th Test century on Thursday as Usman Khawaja and Australia piled on the misery for the beleaguered South Africans in the third Sydney Test.

Smith passed Bradman’s 29 Test hundreds with a majestic pull shot off Anrich Nortje to the boundary ropes to claim a home-town hundred off 190 balls.

He was out two balls later on 104 when he innocuously chipped back a catch to Keshav Maharaj for the left-arm spinner’s first wicket of the series.

At tea on day two, Khawaja had moved on with his 13th Test century to be unconquered on 172 with Travis Head on 17 to have Australia in firm control at 394 for three.

Only Ponting (41) and Waugh (32) have scored more Test centuries for Australia than Smith, who is second only to the immortal Bradman (99.94) with a current Test average of 60.89 in his 92nd Test match.

Meanwhile, Khawaja relentlessly built on his third consecutive Sydney Test hundred and at the interval had faced 335 balls in 477 minutes with 17 fours and a six.

Khawaja shared in a 209-run stand with Smith for the third wicket.

Before lunch, Khawaja danced a celebratory jig after hitting Kagiso Rabada for two through deep square to bring up another hundred at his most productive ground, where he averaged 98 before this Test.

“I grew up here just up the road and my family is here watching, I have friends out in the crowd, it’s always an honour to score runs here,” Khawaja said.

“It’s a slow wicket and if we keep getting good weather it will definitely break up and first innings runs will be crucial.”

The Australians have already wrapped up the three-match series after hammering the Proteas by an innings and 182 runs in Melbourne after their six-wicket rout in the opener in Brisbane inside two days.

Apart from the pursuit of a series whitewash, Australia are trying to lock in a place in the ICC World Test Championship final in London in June.