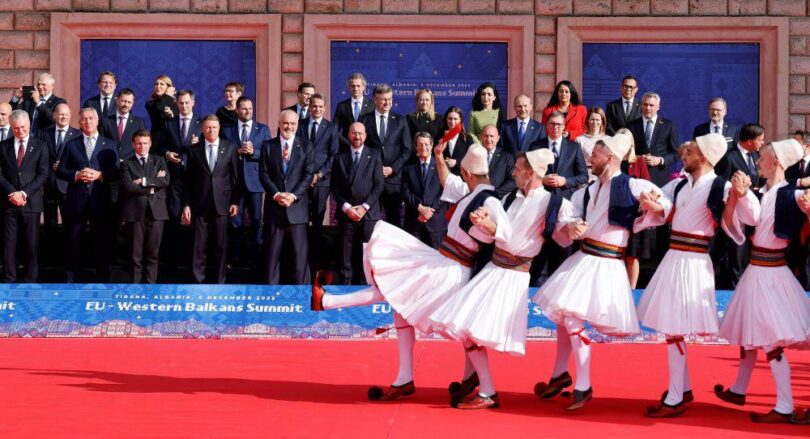 There is always a Groundhog-Day feel to EU-Western Balkan summits. Once a year, the leaders of the region’s six countries get together with their counterparts from the EU member states along with the heads of the European Council, Commission, and the European External Action Service. Wise words are spoken about the Western Balkans’ European future. EU dignitaries talk political and economic reforms. The six leaders—representing Albania, Bosnia and Herzegovina, Kosovo, Montenegro, North Macedonia, and Serbia—nod in agreement. Then everyone goes home and it is business as usual.
Well, this year it is supp-osed to be different and the reason is obvious: the war in Ukraine. The military and political threat Russia poses has prompted the EU to up its game in what co-uld be described, for the la-ck of a better term, as Wi-der Europe. Whether it is French President Emma-nuel Macron’s European Political Community, the candidate status accorded to Ukraine and Moldova, or indeed the push for regional integration in the Western Balkans, there is a sense that the EU could and should do more with regard to its neighbors.
Former Yugoslavia, and in particular countries like Serbia or Bosnia and Herzegovina, look vulnerable to malign Russian influence. Bringing the region into Brussels’ fold through extra money or more vigorous diplomacy has become a more pressing priority since February 24, 2022.
War overshadowed the gathering in one more way. It was unclear until the very last moment whether Serb-ian President Aleksandar Vucic would attend. He feared Belgrade’s ties with Moscow, which Serbian leadership has adamantly refused to downgrade, would be put in jeopardy should he be made to condemn Putin’s invasion.
Had Vucic cancelled, B-osnia would have been abs-ent too, as Milorad Dodik, president of the Republika Srpska entity, would have blocked the country’s participation. Ultimately, both Vucic and Željka Cvijanovic, the Serbian member of Bosnia’s tripartite presidency, turned up.
Although formally only EU representatives signed the summit declaration condemning Russia in stark terms, the fact that they did so “in consultation with the Western Balkan leaders” implies that Serbia is on board. Whatever Vucic received in return for his attendance, clearly Brussels scored a diplomatic coup.
The 2022 summit was different also because for the first time it took place in a Western Balkan country, Albania. Usually, the annual get-togethers are hosted in EU member states with special ties to the region—such as Greece, which organized the 2003 summit in Thessaloniki, when the EU originally promised membership to the region, or last year’s edition at the Brdo castle near Kranj, Slovenia.
The choice for Tirana si-gnaled EU’s commitment to the region. And certainly it was a feather in Albanian Prime Minister Edi Rama’s cap, at a time when he faces a protests by the country’s united opposition preparing to contest the governing S-ocialist Party’s near-compl-ete control of municipaliti-es in next year’s local polls.
Theatrics and symbolism aside, it is patently obvious that the EU cannot deliver the holy grail: speedy membership. Even a country like Montenegro, negotiating its accession for a decade now, is nowhere close. Serbia is bogged down in recurrent crises in Kosovo, despite the much-discussed proposal by France and Germany to settle the dispute once and for all. Albania has barely started talks and the EU requires North Macedonia to modify its constitution in order to begin opening policy chapters. Bosnia and Kosovo are even further behind. It is not a given that any of the six countries will be able to join by the close of this decade.
Acknowledging this political reality, the EU is scrambling to beef up its financial support and initiate policies aimed to boost integration irrespective of accession. The Commission has now unveiled a €1 billion ($1 billion) package for dealing with the fallout of the energy crisis. This is on top of the €9 billion ($10 billion) available for economic recovery in the wake of the COVID-19 slump, build cross-border infrastructure, and underwrite the Western Balkans’ alignment with the EU-driven green transition. One key outcome from the Tirana Summit was a deal between mobile operators from the EU and the region on abolishing roaming charges as of October 2023. It aims at boosting digitalization as well as regional integration.
Regional integration—branded as a stepping stone to accession rather than a diversion—seems to be the EU’s focus at the moment.
With a summit it hosted back in October, Germany has revived the so-called B-erlin Process. The buzzw-ord is Common Regional Market (CRM), a scheme now taking shape thanks to three agreements on passport-free travel, the recognition of academic diplom-as, and the recognition of p-rofessional qualifications r-espectively. The six count-ries signed these on November 3 and there will certainly be more deals, pe-rhaps in the area of energy.
Yet CRM cannot be a silver bullet. For one, the Western Balkans depend on trade and foreign direct investment from the EU to a much larger extent that on neighbors. And storm clouds are already gathering as economic downturn in the union is affecting the region directly.
On the political front, it is the accession track that will get most attention. At long last, the EU’s General Affairs Council has agreed to grant Bosnia candidate status—a decision to be ratified by the European Council on December 15. On November 30, member states’ ambassadors—COREPER II—decided to move forward with visa liberalisation for Kosovo, possibly from January 1, 2024. Kosovo has also just formally submitted a membership application.
In sum, there seems to be a fresh momentum in relations between the EU and the Western Balkans. Yet integration will proceed, as usual, incrementally. Big bang enlargements are a thing of the past.