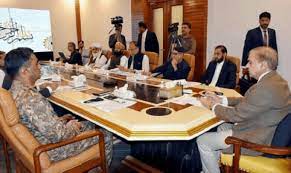 ISLAMABAD: The National Security Committee meeting which was held at PM House in Islamabad on Friday was attended by the top civil and military leadership and was briefed in detail on the security situation in the country.

Prime Minister Shehbaz Sharif presided over the huddle which has now ended.

The participants of the meeting were briefed about the internal and border security of the country. It was expected that the huddle will take some important decisions with regard to security.

The NSC reviewed the counter-terrorism preparedness and chalked out a strategy in the wake of rising terrorist attacks.

The decision to call the security huddle was taken in a meeting between Prime Minister Shehbaz Sharif and Chief of Army Staff Gen Asim Munir on Thursday.

The meeting between the two took place a day after the corps commanders’ conference at the General Headquarters where the surge in terrorism incidents dominated the agenda.

Heading his first corps commanders’ conference on Wednesday, the new army chief, along with his top generals, vowed to crack down on terrorism “without any distinction”.

This decision comes in the wake of a string of attacks in Khyber Pakhtunkhwa, Balochistan as well as Islamabad, involving both the banned Tehreek-i-Taliban and Baloch separatists. As per the available data, the TTP has carried out over 100 attacks over the past few months.

The biggest challenge before the civil and military leadership is to subdue the terrorist threat which has once again reared its ugly head when the TTP renounced it truce with the government last month.

The meeting was briefed about country’s economic and political situation.

Dar apprised the participants of the economic situation.