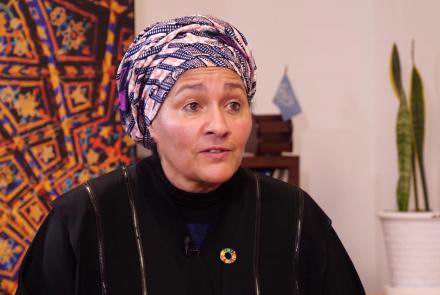 KABUL (TOLOnews): The United Nations deputy chief, Amina Mohammed, in an interview with TOLOnews said that her organization will continue to support women in Afghanistan.
Mohammed said she would put pressure on the Islamic Emirate together with a number of countries to respect Afghan women’s rights.
“Before coming to this country, we visited a number of countries and had consultations to bring momentum and the pressure and the consensus to this government to speak to women to give them hope that we have not left,” she said.
She said the delegation’s visit to Kabul was aimed at meeting with officials in Kabul to discuss the removal of restrictions on women and girls in Afghanistan.
“First, I have been to Afghanistan before. This is my second time, but this visit is very special. It is special because the intention of the secretary general in sending this high-level delegation, myself and the head of UN Women, is to come and meet with the de facto authorities to engage with them on the two bans that they had edict on the prohibition of women in the workplace and in education and to really see how we can reverse those bans,” she said.
The high-ranking UN representative said she will keep negotiating with the Afghan government until women’s rights are protected.
But Islamic Emirate’s spokesman Zabiullah Mujahid said the current government will make an effort to address the issue of restrictions on women’s education and employment.
“They have expressed their concerns in meeting with the officials, and the Islamic Emirate officials have told them that we will take steps in all possible cases that are in accordance with the Islamic Sharia,” Mujahid said.
This comes as women and girls have been banned from attending schools and universities and from going to amusement parks, baths, sports clubs, traveling without a male guardian, and working for non-governmental organizations. The decisions have triggered global reactions.