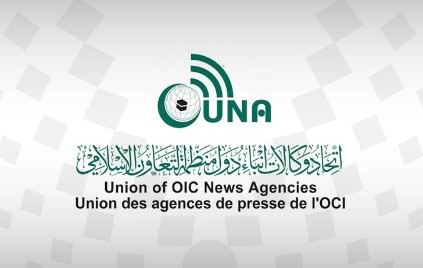 ISLAMABAD (APP): The Union of Organization of Islamic Cooperation News Agencies (UNA-OIC) Sunday strongly condemned the vile act of desecration of the Holy Quran by far-right activists in front of the Turkish Embassy in Stockholm, Sweden.
“UNA warns that this provocative action, which is considered a hate crime and has been committed repeatedly by far-right extremists, targets Muslims, insults their sacred values, and serves as a further example of the alarming level reached by Islamophobia, hate, intolerance, and xenophobia,” a press release said.
The UNA further urged the Swedish authorities to take necessary measures against the perpetrators of this hate crime and called for increased international efforts to prevent the re-occurrence of such acts and for solidarity to fight Islamophobia.
UN Alliance of Civilizations condemns desecration of Holy Quran in Sweden as ‘insulting’ to Muslims: The top official for the U.N. Alliance of Civilizations (UNAOC), Miguel Moratinos, has “unequivocally” condemned the “vile” act of burning the holy Quran in Sweden on Saturday by leader of the far-right party Hard Line, saying it was an affront to Muslims.
“It is disrespectful and insulting to the adherents of Islam and should not be conflated with freedom of expression,” Moratinos, the High Representative of UNAOC , an initiative aimed at galvanizing international action against extremism, said in a statement issued at UN Headquarters in New York on Sunday.
“While the High Representative stresses the importance of upholding the freedom of expression as a fundamental human right, he also emphasizes that the act of Quran-burning, amounts to an expression of hatred towards Muslims,” the statement said. Recalling the UN General Assembly resolution of 26 January 2021 that reaffirms that the exercise of freedom of expression carries with it duties and responsibilities, the High Representative expressed his “deep concern” at the overall rise in instances of discrimination, intolerance and violence, regardless of the actors, directed against members of many religious and other communities in various parts of the world, including cases motivated by Islamophobia, anti-semitism and Christianophobia and prejudices against persons of other religions or beliefs. “The High Representative further stresses that mutual respect is essential for building and promoting just, inclusive and peaceful societies rooted in human rights and dignity for all,” the statement said.
“In this context,” it added, “the High-Representative recalls the United Nations Plan of Action to Safeguard Religious Sites led by the United Nations Alliance of Civilizations, which provides an overarching framework and a set of recommendations including strengthening religious pluralism and promoting intercultural and inter-religious dialogue , mutual respect and understanding.”
Meanwhile, asked for reaction, Farhan Aziz Haq, the UN deputy spokesperson, told APP, “We believe all religions and cultures must be treated with respect.” UN Secretary-General Antonio Guterres is traveling abroad. He is currently in Cape verde, the westernmost point of continental Africa.
NA speaker denounces desecration of Holy Quran in Sweden: National Assembly Speaker Raja Pervaiz Ashraf and Deputy Speaker Zahid Akram Durrani on Sunday denounced the desecration and burning of a copy of the Holy Quran during a protest in Stockholm, Sweden, describing it as the biggest threat to world’s peace. In a statement, the speaker and deputy speaker said the heinous act of desecration of the Holy Quran has hurt the religious sentiments of Muslims all over the world.
They said that Islam is a peaceful religion and respects the teachings and beliefs of all religions.
The speaker said that no one can be allowed to desecrate the holy books belonging to other religions under the guise of freedom of expression. He said that these kinds of heinous incidents create hatred for each other. They emphasized the need to take immediate action against the elements involved in this heinous act.