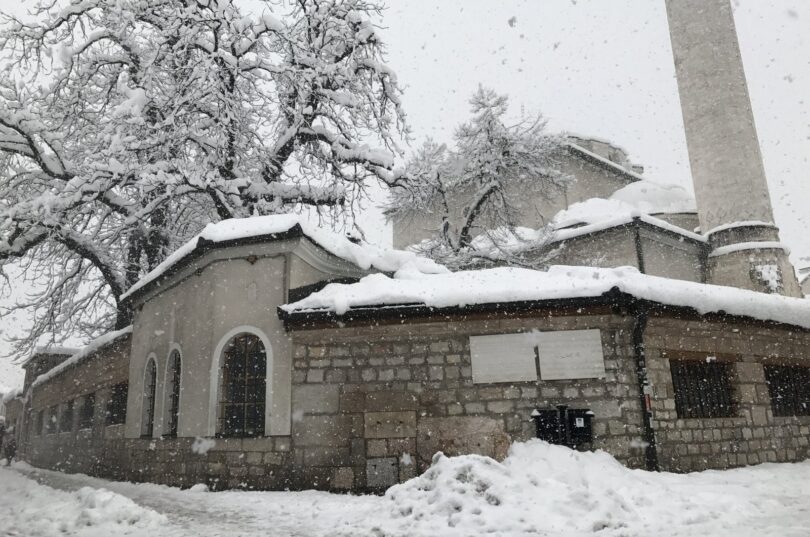 A place that carries traces and the spirit of the Ottoman Empire in the capital of Bosnia-Herzegovina, in the heart of the Balkans, the historical Bascarsija with the old bazaar of Sarajevo still stands with structures from the Ottoman era and amazes visitors with historical charm

Founded in the 15th century, the Ottoman bazaar of Bascarsija, as the name suggests and literally translates to “main market,” is the heart of Sarajevo. This bazaar carries the Ottoman spirit to the present day, with its famous Sebilj fountain and other historical structures, where the aroma of Bosnian coffee, which is served individually in bronze coffee pots, dot the square.

After Sarajevo was conquered by the Ottomans, reconstruction began in the region now referred to as the Old City. Mosques, public fountains, madrasas, inns and baths were being built. Most structures still stand today. Let’s take a look at some of the monuments you can explore in Bascarsija.

One of the landmarks of Bascarsija is the Sebilj, located in the middle of the bazaar. The carved wooden domed fountain is usually surrounded by pigeons and definitely deserves to be captured in photographs.

The fountain, which is one of the most important symbols of the city, was built by Mehmed Pasha Kukavica in 1753. According to the legend, whoever drinks from this fountain will return to Sarajevo someday. Sebilj dazzles as it adds color to the square during the day and sparkles with light in the evenings. The magnificent lighting of the fountain is quite remarkable, especially when it gets dark.

With its elegant structure and wooden architecture, Sebilj was inspired by the fountains of Istanbul. At the base, one can find notes in Ottoman Turkish along with verses from the Holy Quran. A replica of Sebilj was built in Türkiye’s Bursa, which is very similar to Sarajevo’s icon. These two fountains symbolized the brotherhood of the two cities.

Another important structure in Bascarsija is the Clock Tower. Located next to the Gazi Husrev-beg Mosque, the structure stands at a height of 30 meters (98 feet). An officer called Zlatar adjusts the clock every week and also takes care of it. The clock is set according to the lunar calendar, which means that when the hands indicate 12 o’clock it is at the moment of sunset, the time for the sunset prayer. When the clock hits 12 o’clock, bells ring and the adhan – call to prayer – is delivered from the minaret next to it at the same time.

I can say that these moments, where the sounds of prayer and bells mix, create a very different atmosphere in the bazaar. By the way, it is claimed that there is no other clock like this that works according to the lunar calendar except this clock. At the same time, the mechanism of the clock in the tower has been replaced with one made by Gillett & Bland of London, who constructed the city’s famous Big Ben.

The mosque, built by Gazi Husrev-beg and named after him, has survived to the present day as one of the most beautiful examples of Islamic architecture in Bosnia-Herzegovina. The mosque, which was badly damaged during the war, was restored in accordance with its original state and regained its former glory.

Especially during Ramadan, the call to prayer is still heard from the mosque’s minaret, which is the heart of the city for Muslims. We visited Sarajevo in December, under the flaky snow. In this setting, where the sound of the adhan and bells mixed together, the rare and unique atmosphere gave us beautiful postcard views.

The mosque was built in 1531 by Mimar Sinan, the chief Ottoman architect of the 16th century. It was heavily damaged during the Bosnian War and was restored in 1996. You can visit the mosque all seven days a week.

This inn, which is part of the Gazi Husrev-beg Foundation, is one of the important historical places in Bascarsija. At the same time, out of 50 historic inns in Sarajevo, Morica Han is the only inn that has survived to the present day. You should definitely relax and have Bosnian coffee under the linden tree at this inn, which has a completely different ambiance. Then visit the nearby shops that sell authentic goods and rugs.

The Hünkar Mosque – or the Emperor’s Mosque – which was built as a gift to Sultan Mehmed II, is also the first mosque to be built in Sarajevo. The mosque, which Evliya Çelebi – a 17th-century Ottoman explorer – also mentioned in his “Seyahatname” (“Book of Travel”), is located opposite the Sultan Bridge over Miljacka river.

The other name of this madrasa, which was used as a school during Ottoman times and was said to have a large collection of books at the time, is Kurşunlu Madrassa.

As the name suggests, Brusa Bezistan was a closed marketplace that sold Bursa Silk, back in 1551 during the Ottoman period. Like other places, it was restored after the bazaar was damaged during the war. Sarajevo Museum is a part of Bezistan, where you can find different souvenirs of traditional handicrafts.

Bascarsija, which is the largest Turkish bazaar in the Balkans, is one of the most lively places in Sarajevo. After visiting historical buildings here, you can end your fatigue with a Bosnian coffee. You can feel the pulse of Sarajevo while watching people in this bazaar, which is the heart of the city, all the while sipping your coffee.

Do not miss starting the day with wonderful Balkan flavors and ending the day with delightful tastes in Bascarsija because pastry and meatball shops around the bazaar await you. All the damaged buildings in Sarajevo, which bore scars from the war, have been restored in accordance with their original glamor.

Every restoration has been made without disturbing the historical texture, and without making people forget the traces of the war. Competent authorities have put Sarajevo back on its feet. I highly recommend you explore this beautiful city, which has managed to survive despite its sad history, as soon as possible.