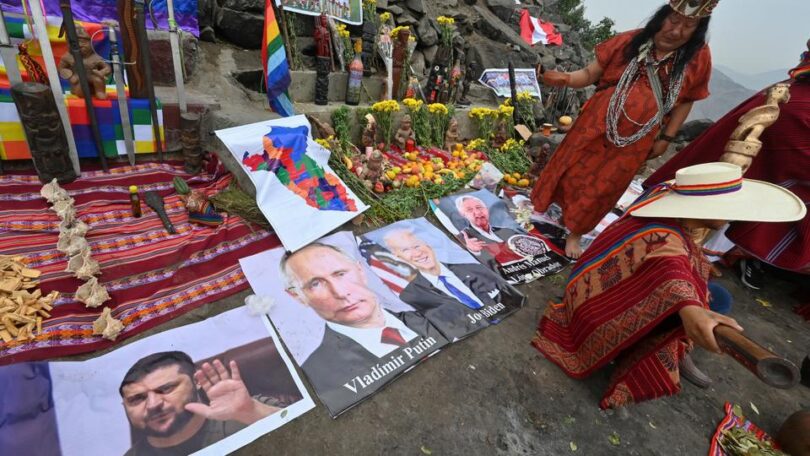 Peace between Russia and Ukraine is on the horizon in the new year, a group of shamans and healers in Peru’s capital Lima have predicted during an annual ceremony.

Atop a hilltop, the shamans, donning traditional Andean attire, welcomed the coming year on Wednesday in a purification ceremony incorporating flowers, incense, a snake, and photos of the Ukrainian and Russian presidents.

“All this will calm down. Peace, tranquillity will come. That’s what we’ve seen,” said shaman Cleofe Sedano, predicting a peace treaty would be signed by August.

The ceremony, performed every year in late December, comes ten months after Russia’s invasion of Ukraine, which has left tens of thousands dead.

But Russia says there will be no “peace plan” possible with Ukraine if Kiev does not account for four of its regions joining Russia.

Russia does not currently control the regions of Donetsk, Lugansk, Kherson and Zaporizhzhia in full, but Russia’s top diplomat Sergey Lavrov says that is Moscow’s ultimate goal.

Issuing their omens after hovering over a sheet of flowers and coca leaves, with skulls on the ground, the shamans also predicted natural disasters.

“Next year there will be an earthquake, but not in the capital of Peru, in another place, mostly abroad in the northern part of America, which could be the United States… there will be a lot of tragedy, mostly climatic,” said shaman Walter Alarcon.