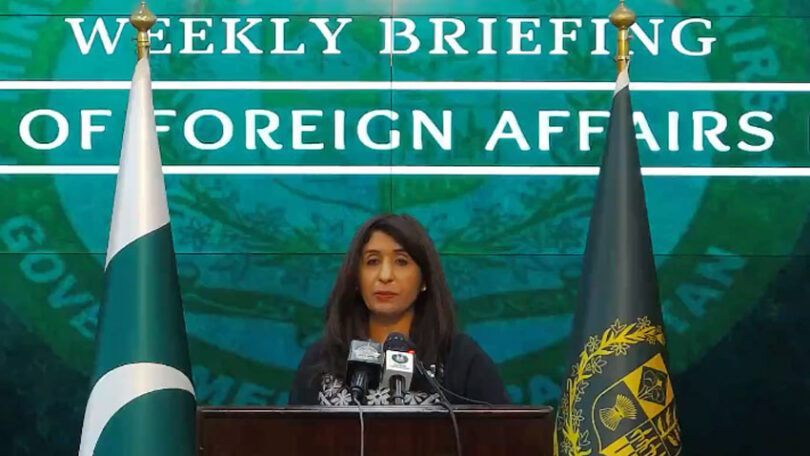 ISLAMABAD (PPI): Foreign Office has said Pakistan is determined and capable to counter any threat to its peace and security. Responding to the queries of media persons at her weekly news briefing here in Islamabad on Thursday regarding terrorist threat emanating from Afghanistan, Foreign Office Spokesperson Mumtaz Zahra Baloch said that engagement mechanisms between Pakistan and Afghanistan are functional.
She said Pakistan will continue to engage with the Afghan side on matters of mutual concerns including security and border management. The Spokesperson said Pakistan has consistently said it will continue to support the Afghan people in their quest for a unified, independent and sovereign Afghanistan that is at peace with itself and the neighbors.
Responding to a question, Mumtaz Zahra Baloch said a positive momentum is being witnessed in relations between Pakistan and the United States. She said Pakistan wants to proceed forward on the basis of mutual trust, respect and interest. The Spokesperson said Pakistan and Saudi Arabia have close fraternal ties which are rooted in history and common faith. She said our relations are multidimensional and that includes cooperation in defense domain.
She said the visit of the Army Chief to the Kingdom is in the context of promoting Pakistan-Saudi Arabia relations and defense ties. As regards the International Conference on Climate Resilient Pakistan being held in Geneva on Monday next, the Spokesperson said Pakistan expects long term response from the international community for building a climate resilient infrastructure. Giving an overview of Indian human rights violations in illegally occupied Jammu and Kashmir, Mumtaz Zahra Baloch said the Indian security forces reportedly killed 214 Kashmiris, fifty seven of them in custody or in fake encounters during the last year.
Only last week, four individuals were killed in a fake encounter in Sidhra town in Jammu. There are reports that bodies were charred beyond recognition. She urged the international human rights machinery and organizations to take note of this tragedy. The Spokesperson said over four thousand Kashmiris remain imprisoned in different jails in IIOJK and India. Political prisoners and human rights defenders continued to be targeted and incarcerated.
Mumtaz Zahra Baloch said Pakistan will continue to extend unstinted moral, political and diplomatic support to the people of Jammu and Kashmir in their quest for self-determination in accordance with the UN Security Council resolutions.