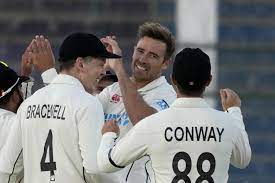 KARACHI (AP): Pakistan lost two wickets without scoring in its chase of the 319 winning target against New Zealand at the end of an eventful fourth day of the second test on Thursday.

New Zealand set up its bid for a series victory in its first test tour to Pakistan in 20 years after declaring its second innings on 277-5 and using the last three overs of the day to bowl opener Abdullah Shafique and nightwatchman Mir Hamza.

Pakistan was 0-2 at stumps and has to beat its previous highest successful chase of 314 runs in 1994 when Australia was beaten by one wicket at the same National Stadium.

On a day when the umpires made misjudgements, New Zealand left no doubt when captain Tim Southee knocked back Shafique’s off stump off the second ball which kept a bit low and Ish Sodhi clean bowled Hamza for a pair in the match to leave Pakistan in deep trouble.

Tom Blundell (74) and Michael Bracewell (74 not out) firmed up New Zealand with a 127-run stand. Blundell holed out in the deep as New Zealand looked for quick runs and Southee made a late declaration.

New Zealand successfully overturned Wharf’s two leg before decisions in favor of legspinner Abrar Ahmed and Dar erred when his caught behind ruling against Henry Nicholls (5) was overturned.

Pakistan didn’t go for an lbw referral after Tom Latham (62) hit his second successive half-century when Wharf ruled for the batter and video suggested the ball would have hit the leg stump.

Blundell also successfully overturned an lbw decision before he scored and was dropped by wicketkeeper Sarfaraz Ahmed just before tea.

Sarfaraz also dropped Bracewell soon after he completed his half-century and missed a stumping of Daryl Mitchell just before the New Zealand declaration.

Latham and Kane Williamson’s (41) century stand pushed New Zealand ahead by 155 runs before Pakistan struck three times in the space of 14 runs.

Latham was brilliantly snapped up by Abrar, who plucked a low left-handed catch at square leg to break a threatening 114-run stand.

Williamson followed when Abrar finally had him lbw after twice wasting two reviews against the former captain before lunch.

Hasan Ali, playing his first test since July, picked up his first wicket when Nicholls mistimed a pull shot and was caught at mid-off.

Latham dominated the spinners with sweep shots and hit 11 boundaries. He survived a chance just before his 25th half-century when Babar Azam dropped a difficult catch at midwicket.

Earlier, Devon Conway was out for a golden duck before Latham and Williamson guided New Zealand to 76-1 by lunch for an overall lead of 117 runs.

Left-arm fast bowler Hamza picked up his first test wicket in four years when he had first-innings century-maker Conway clean bowled off the first ball when it shaped into the left-hander and struck the off stump after clipping Conway’s pads.

Hamza was wicketless in the drawn first test last week after being recalled for the first time since 2018.

Williamson and Latham batted with patience against pace on a pitch which looked good for batting, with only the odd ball keeping low and hardly any turn for the spinners.

Legspinner Sodhi (3-95) wrapped up Pakistan’s first innings in the first over when he had No. 11 Abrar trapped. Left-arm spinner Ajaz Patel picked up 3-88. Pakistan lost its last five wickets for 23 runs.