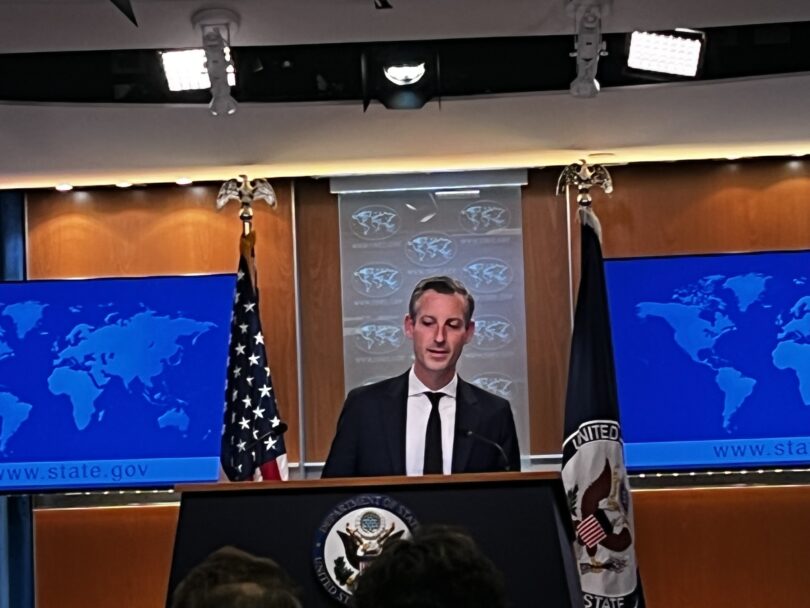 WASHINGTON DC: US State Department Spokesperson, Ned Price stated that Kashmir is an issue between Pakistan and India and they need to solve this issue with each other. Ned gave the reply to a question by The Frontier Post that Indian Congress leader Rahul Gandhi in a statement a day earlier had said that once in power, he will give the people of Kashmir their right of autonomy and self determination.

To another question by The Frontier Post regarding corruption reported by the Ukrainian military in the funds and support given by the United States, Ned Price stated that the United States takes transparency and accountability very seriously when it comes to the support that the US is providing to the people of Ukraine. He said that there is a robust system in place which keeps an eye on how the Billions of Dollars aid is being used. “There are teams in Kiev and here in Washington DC which make sure that no misuse is made in these funds.”

Regarding Russia, Ned Price stated that the US desires that the communication lines are always open between both countries and important issues related to prisoner exchange and durable peace can be discussed.

With regard to China buying oil from Russia, Ned Price stated that “now is not the time to do trade activities with Russia.” Ned commented the same with regard to China buying oil from Iran and said that we monitor the trade activities from Iran and that China should follow the sanctions imposed on Iran by the United States. Ned also said that “we would like to see more discussion with China” and the upcoming visit of Secretary Blinken to China will be an opportunity to discuss these issues in detail.