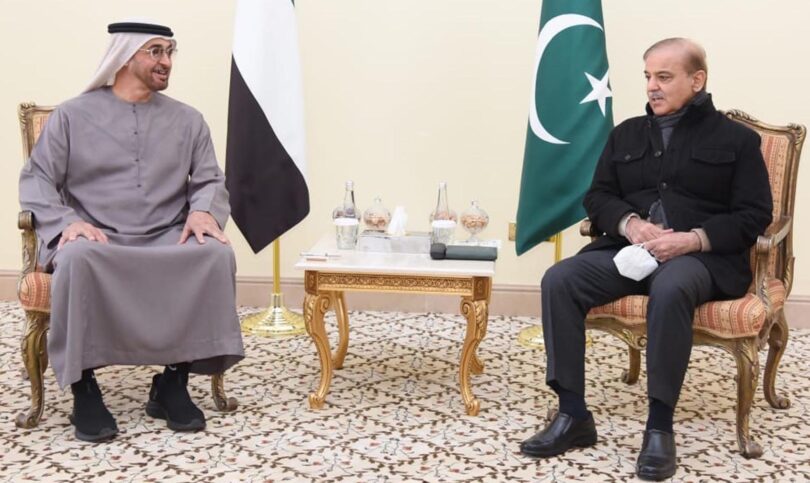 F.P. Report
RAHIM YAR KHAN: Prime Minister Shehbaz Sharif on Wednesday met President of the United Arab Emirates Sheikh Mohamed bin Zayed Al Nahyan wherein the two leaders expressed their resolve to further enhance brotherly bilateral relations.
The meeting took place here as the UAE president arrived in Pakistan on a private visit, a PM Office statement said. On his arrival at Chandna Airport, Sheikh Mohamed bin Zayed Al Nahyan was welcomed by Prime Minister Shehbaz Sharif, Minister for Information Marriyum Aurangzeb, Caretaker Chief Minister of Punjab Syed Mohsin Raza Naqvi and Special Assistant to the Prime Minister Syed Tariq Fatemi.
During their meeting, the prime minister recalled his recent visit to the UAE and emphasized that both countries would work on the understandings reached between the two leaders during that visit. Sheikh Mohamed bin Zayed Al Nahyan said that the brotherly relations between the two countries went back many decades and his father, who had immense love for Pakistan and its people, laid the foundation of their bilateral ties. The UAE president said that he considered Pakistan as his second home and assured the prime minister that the UAE would always stand by Pakistan.
Earlier, Prime Minister Shehbaz Sharif will receive President of United Arab Emirates (UAE) Mohammed bin Zayed Al Nahyan on his arrival in Rahim Yar Khan today. The prime minister, during his day-long visit to Rahim Yar Khan, will welcome the UAE president at the Chandana Airport. “The two leaders will discuss further promotion of brotherly ties between Pakistan and the UAE and other matters of bilateral interest,” the PM Office said.
PM urges youth to apply for loans on easy terms under new scheme: Prime Minister Shehbaz Sharif has said that under the PM Youth Business & Agriculture Scheme, the young people can apply for a loan up to Rs7.5 million on easy terms conditions while encouraging women, transgender and differently abled people to apply and contribute to national development.
Taking to his Twitter handle, Prime Minister Shehbaz wrote: “I launched PM’s Youth Business & Agriculture Loan Scheme yesterday. This new scheme builds on a number of youth development programs. From PEEF loans to laptop scheme to self-employment scheme, PML-N has demonstrated its commitment to youth empowerment under leadership of MNS. “Under the current Loan Scheme, the youth can apply for a loan up to Rs75 lac on easy terms & conditions (there is no interest on loan up to Rs5 lac). I strongly encourage our women, transgenders & differently abled people to apply & contribute to national development.”
Prime Minister Shehbaz Sharif announced the “Aasan Qarza Program” (an easy loan program) for the youth on Tuesday. The PM announced that under this program, his government would provide an easy loan of Rs0.5 million to Rs1.5 million.
PM Shehbaz made this announcement during his address to a ceremony of the easy loan program for youth in Islamabad yesterday. Youth will be provided interest-free loans up to Rs0.5 million and from Rs0.5 million to Rs1.5 million at an interest rate of 7 percent, the PM said adding that these loans will be returned in seven years. The Prime Minister Shehbaz Sharif also congratulated Chris Hipkins on becoming the new prime minister of New Zealand. In a tweet, the premier wrote he looked forward to working with him to strengthen and expand the relations between the two friendly countries. “I extend my best wishes to him,” he concluded.