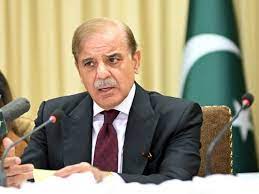 ISLAMABAD (APP): Pakistan would place a comprehensive post-disaster framework plan for recovery, rehabilitation and reconstruction before development partners and friendly countries at the International Conference on Resilient Pakistan in Geneva on January 9.
Prime Minister Shehbaz Sharif will co-host the conference along with the UN Secretary-General Antonio Guterres.
Leaving before Geneva. The prime minister in a statement said, “Bridging the funding gap is key to restore critical infrastructure, rebuild lives and livelihoods and revive economy.”
He said that millions of Pakistanis, affected by unprecedented devastation due to floods, looked for compassion and solidarity to build back better.
“Humanity is at an inflection point in the world history. Our actions today will shape the resilient future for our succeeding generations, the prime minister posted on his Twitter handle.
He said that he would take the opportunity to present the case of flood victims before the world. “I will also throw light on steps my govt. has taken for relief and rehabilitation,” he further posted.
In Pakistan, record monsoon rains and melting glaciers last September displaced some 8 million people and killed at least 1,700 in a catastrophe blamed on climate change.
Most of the waters have now receded but the reconstruction work, estimated at around $16.3 billion, to rebuild millions of homes and thousands of kilometres of roads and railway is just beginning and millions more people may slide into poverty.
Prime Minister Shehbaz Sharif, will present the recovery framework at the conference where United Nations Secretary General Antonio Guterres and French President Emmanuel Macron will also speak.
Guterres, who visited Pakistan in September, has previously described the destruction in the country as “climate carnage”.
“This is a pivotal moment for the global community to stand with Pakistan and to commit to a resilient and inclusive recovery from these devastating floods,” said Knut Ostby, United Nations’ Development Programme’s Pakistan Representative.
Prime Minister Shehbaz Sharif on Sunday departed to Geneva along with a high-level delegation to co-chair the conference along with UN Secretary.
Foreign Minister Bilawal Bhutto Zardari, Minister for Finance Ishaq Dar, Minister for Climate Change Sherry Rehman and Minister for Information and Broadcasting Marryium Aurangzeb accompanied the prime minister, PM Office Media Wing said in a press release.
During the conference, Pakistan will put emphasis upon the need for global support and long-term partnership to implement the framework plan.
In the inaugural high-level opening segment, the official document would be unveiled for reconstruction and rehabilitation of the flood-affected areas and feature partner support announcements.
The prime minister and the UN secretary general will also hold a joint press stakeout.
Leaders and high-level representatives from several countries and international financial institutions, foundations and funds are expected to attend the conference, both in person and virtual format.
The conference will bring together governments, leaders from the public and private sectors and civil society to support the people and the government of Pakistan.
The reconstruction framework to be presented before the conference will lay out a multisectoral strategy for rehabilitation and reconstruction in a climate-resilient and inclusive manner.
Secondly Pakistan will try to secure international support and forge long-term partnerships for building Pakistan’s climate resilience and adaptation.