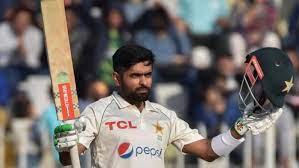 KARACHI: Pakistan’s skipper Babar Azam has achieved multiple milestones during his century knock in the first innings against New Zealand on the first day of the two-Test series at Karachi.

Babar, when he reached the 13th of his innings on Monday morning, surpassed Mohammad Yousaf to become Pakistan’s leading run scorer in international cricket in a calendar year.

Yousaf scored 2,435 runs in 39 innings across all three formats in 2006. Babar took 51 innings to break Yousaf’s 16-year-old record. He is also the first-ever Pakistani to amass more than 2,500 runs in international cricket in a calendar year.

Babar then reached his 50 which brings him to the top along with Kumar Sangakkara in the list of most 50+ scores in a calendar year. Sangakkara scored 25 scores of 50+ in the year 2014.

The Sri Lankan player took 56 innings to reach the milestone, and Babar has so far batted in 51 innings.

Babar also became the leading run-scorer in Test cricket in 2022 surpassing England’s Joe Root. Babar topped Root when he reached 90 in his innings. The England batter had scored 1,098 runs in 27 Test innings at an average of 45. Babar surpassed him playing 16 Test innings.