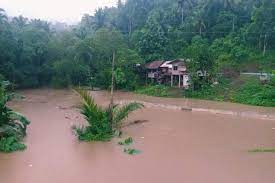 Two people were killed and nine others were missing after heavy seasonal rain inundated parts of the southern region of Mindanao, the officials added.

The disaster dampened celebrations on the mainly Catholic nation’s most important holiday.

“The waters rose above the chest in some areas, but today the rains have ceased,” civil defense worker Robinson Lacre said by phone from Gingoog city, which accounted for 33,000 of the 45,700 people evacuated from their homes.

The coast guard said it rescued members of more than two dozen families in Ozamiz city and Clarin town at the height of the flooding.

Two deaths were reported in the town of Jimenez.

The central and southern Philippines have been hit with bad weather as the disaster-prone nation of 110 million people began a long Christmas holiday.

Millions of people travel to their hometowns for family reunions during this period.

The coast guard also said strong winds and big waves sank a fishing boat on Christmas Day off the coast of the central island of Leyte. Two crew members were killed, while six others were rescued.

The Philippines is ranked among the most vulnerable nations to the impacts of climate change.

Scientists have warned that storms are becoming more powerful as the world gets warmer.