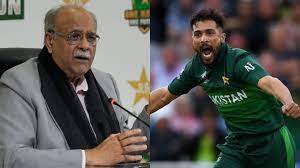 Najam Sethi amir can make a come back and rejoin if he wants.

Sethi said that he had a very strict and tough stance against spot-fixing. Not any of the chairs before him and either after him that kind of a stance. He said that he believed that the spot-fixer was unforgivable but, once he has completed the sentence, he can come back and play if he is selected. This is one of their rights.