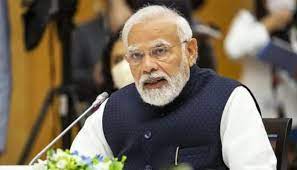 NEW DELHI: The Democratic Youth Federation of India (DYFI), the youth wing of the ruling CPI-M in Indian state of Kerala, has announced that they will screen the controversial documentary ‘The Modi Question’ on Tuesday evening in the state capital of Thiruvananthapuram despite stiff opposition from the Bharatiya Janata Party (BJP), reported Indian media.

The police are keeping a strict vigil after the Bharatiya Yuva Morcha, BJP’s young wing, declared that they will stop the screening of the banned documentary, which talks about the 2002 Gujarat riots when Prime Minister Narendra Modi was the chief minister.

Announcing its decision on social media, the DFYI said a big screen will be installed at Poojapura area to screen the documentary at 6 pm. “Let people see the fascist face of the Sangh Parivar outfits. “We will go ahead with the plan and more screenings will be done at other places also in the coming days,” DFYI state president VK Sanoj said.

Even the Youth Congress has decided to screen the documentary in many campuses across the state.

The BJP strongly opposed the developments, and asked chief minister Pinarayi Vijayan to prevent it from happening. “It is a move to insult the country and its judicial process. Some people want to whip an unfortunate incident, which happened two decades ago, to create unrest. It will create communal tensions again and Gujarat has not witnessed a communal riot in the last two decades,” BJP state president K Surendran said.Minister of state for external affairs V Muraleedharan also asked the Kerala government to not give permission for the screenings, especially since the Supreme Court had delivered its verdict on the matter in 2013.

Last week, the BJP government directed Twitter and YouTube to block links to the documentary, which the ministry of external affairs dubbed as a “propaganda material that lacked objectivity and was guided by a colonial mindset”.

A top Indian university has banned the screening of a BBC documentary about Prime Minister Narendra Modi’s role during deadly 2002 sectarian riots, after his government attempted to block its spread online.

Students at the prestigious Jawaharlal Nehru University in New Delhi had planned to screen the documentary on Tuesday, defying efforts by Indian authorities to restrict its showing.

But a memo from the university’s registrar late on Monday ordered students to cancel the event and warned it would take “strict disciplinary action” if its edict was disobeyed.

“Such an unauthorised activity may disturb peace and harmony of the university campus,” it said.

Modi’s government has been accused of stifling dissent by free-speech activists and opposition leaders for years.

On Saturday it used emergency powers under India’s controversial information technology laws to block the documentary from being shared on social media.

India’s order to social media platforms to block links to the documentary “flagrantly contradicts the country’s stated commitment to democratic ideals”, Beh Lih Yi of the Committee to Protect Journalists said in a statement on Monday.

The 2002 riots in Gujarat began after 59 Hindu pilgrims were killed in a fire on a train. Thirty-one Muslims were convicted of criminal conspiracy and murder over that incident.

The two-part BBC documentary cited a previously classified British foreign ministry report quoting unnamed sources saying that Modi met senior police officers and “ordered them not to intervene” in the attacks on Muslims that followed.

It also said the violence was “politically motivated” and the aim “was to purge Muslims from Hindu areas”.

The riots were impossible “without the climate of impunity created by the state Government… Narendra Modi is directly responsible,” it concluded.

Modi ran Gujarat from 2001 until his election as prime minister in 2014 and briefly faced a travel ban by the United States over the violence.

An investigation team appointed by the Indian Supreme Court to probe the role of Modi and others in the violence said in 2012 it did not find any evidence to prosecute him.