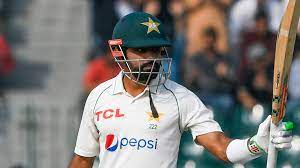 LAHORE: There have been recent accusations against Pakistan cricket team’s skipper Babar Azam on social media. Several pictures, videos, and screenshots of alleged chats with a girl have surfaced on Twitter, claiming that Babar was involved in inappropriate behavior, specifically sexting a fellow Pakistani cricketer’s girlfriend and being “honey-trapped”.

Fox Cricket, which is a media partner of the Pakistan Cricket Board (PCB) had also reported the controversy and shared it on their official Twitter handle. “Babar Azam is being accused of allegedly sexting teammate’s girlfriend after videos of voice recordings went viral online.” wrote Fox Cricket.

After this, PCB slammed them for covering an unverified news about the captain of Pakistani team. “As our media partner, you might have considered ignoring such unsubstantiated personal allegations which Babar Azam has not deemed worthy of a response,” said PCB on Twitter.

The parody account that made the claims and allegations on Babar also came forward and said that he built the story in a satirical way, and it wasn’t true. He further replied to PCB, “If you want to sue Fox News, reach me out in DMs. I am ready to become a witness in this case for my fellow lovely Pakistani people.”

The deletion of the Fox Cricket’s article regarding the controversy surrounding Babar Azam, has been met with positive reactions from netizens. They have praised PCB for their actions. Despite the accusations, Babar has not publicly commented on the issue and has focused on his cricket performance.

Amid the controversy, his fans came out in support of the player and have been using the hashtag #StayStrongBabarAzam on social media to show their support.