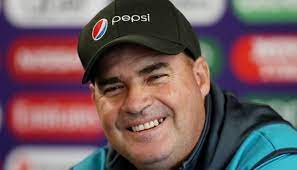 LAHORE : The Pakistan Cricket Board on Tuesday night confirmed it has been in talks with former national team head coach Mickey Arthur with a view to appointing him as the head coach to guide the side through to the ACC Asia Cup, ICC Men’s Cricket World Cup 2023, ICC Men’s T20 World Cup 2024 and the ICC Champions Trophy 2025.

However, owing to his long-term contract with Derbyshire, “we have also discussed a proposal to act as a consultant to the PCB on a time-sharing basis with Derbyshire.” Unfortunately, however, this option is proving difficult to materialise for various reasons on both sides, said a spokesman of the PCB here.

“Under the circumstances, the PCB will continue its search for the right person to fit the slot of the national team head coach and some top names are already under consideration”, he said. (APP)