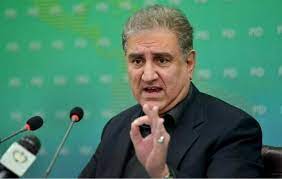 It has become eleven thousand from rupees. However, the federal government has kept silent on inflation. Khyber Pakhtunkhwa is responsible for terrorism. Inflation has increased by 80% during eight months. He said that Federal Finance Minister Ishaq Dar has come on a mission to bankrupt this country. His ship is ready and all the robbers, including Dar, will escape as soon as the country is declared bankrupt. Due to the worse economic conditions, after the textile industry, the automobile industry is also in decline.

Automobile manufacturing companies in Pakistan are closing down their plants. The fascist government tried every tactic against Tehreek-e-Insaf but still failed. He said that even after all the tactics of the imported government, Tehreek-e-Insaaf is the most popular party in the country.

Today, the word “election” has become a joke of PDM all over the country. These people are running away from the election like this, the people will never accept the technocrat setup, this country will be run by the people. Due to the fear of Imran Khan’s popularity, the municipal elections of Islamabad and Sindh have been postponed and now these people are reluctant to hold national elections and want to escape. Without Imran Khan, Pakistan’s politics is incomplete and meaningless. After Imran Khan announced the dissolution of the assembly, everyone is shaking.

PDM is afraid of the people, how long will they run away from the election? They don’t want elections, we want elections, Imran Khan is speaking the truth and everyone feels bad. He said that he will fight till his last breath, he will not leave this country to thieves. All the fugitives are coming back, the last fugitive is also being called. At first, everyone said to dissolve the assemblies, when Imran Khan said that he is dissolving the assembly, they started shaking. Due to the wrong policies of the current imported government. It is going towards disaster, due to inflation, people’s purchasing power is having negative effects on all kinds of businesses, the government has taken steps to increase the economic growth. Due to skyrocketing prices of petroleum products, electricity and gas, the problems of the poor are increasing. To give relief to the people by reducing the tax rate in petroleum products and utility bills.

The government is restricting business hours in such a situation when the economy needs to be boosted. Instead of flying solo, government officials should consult to find solutions to problems and not make decisions that start shrinking the economy. Due to the closure of industries in the country, unemployment is increasing and the country has become very weak economically. The textile processing sector is facing problems due to lack of electricity and gas due to increase in taxes. The scope of export, import will be wide and exchange will come. How can foreign orders be fulfilled in such circumstances? From the people to the businessmen are caught in the financial vortex. The industrial sector is closing down across the country.

Unemployment is increasing. The people have lost their daily bread due to the cut off of Sui gas and low pressure, the commercial and domestic consumers are facing serious problems, the government has immediately declared an economic emergency. Imran Khan is the most popular leader of Pakistan, whenever elections are held, Pakistan Tehreek-e-Insaaf will achieve historic success.

Muslim League (N) and People’s Party have been in power for many decades, but they are in power for the welfare of the people and They could not give any policy to bring prosperity in their lives, Nawaz Sharif does not want to return to the country but wishes to become the Prime Minister but now this time will never come. Tehreek-e-Insaf played a role in the development of this area.