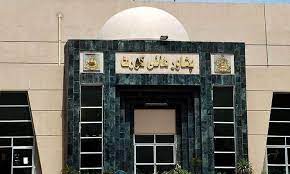 PESHAWAR: A divisional bench comprising of Chief Justice Peshawar High Court (PHC) Justice Qaiser Rashid and Justice Shakeel Ahmad observed that if political favoritism were found during recruitment in Irrigation’s department then court will order National Accountability Bureau (NAB) probe into matter and directed Secretary Irrigation to appear on next hearing, on Tuesday.

During hearing Chief Justice Qaiser Rashid remarked that various objections are raising on recruitment process in different department at Nowshera and added it looks like that vacant posts have been fulfilled on political affiliation.

The counsel for petitioner Shah Faisal Ilyas Advocate argued that 597 class-4 employees were recruited in Irrigation’s department in which maximum are ghost employees and added that Rules were ignored because recruitment have been on nepotism and political favoritism by neglecting Employment Exchange enlisted candidates.

In the meantime, Chief Justice Pehsawar High Court Justice Qaiser Rashid remarked that such complaints are reporting from Nowshera and observed that if political favoritism proved in recruitment at Irrigation’s department then court will direct NAB to conduct inquiry in this regard while adjourned further hearing.