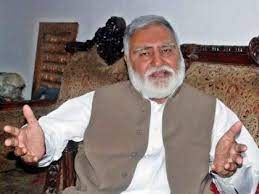 PESHAWAR: Leader of the Opposition in Khyber Pakhtunkhwa Assembly Akram Khan Durrani on Tuesday slammed KP Chief Minister Mahmood Khan for his dual standard over the rights of the province.

“On one side the CM was seeking support of opposition parties to stage a protest with them against the federation for rights of the province while on the other he was threatening to dissolve the assembly,” he said while speaking on a point of order in the House.

Durrani said that the CM told a lie to the nation in his press conference at Islamabad the other day in which he claimed that the opposition was supporting his government for the protest, adding that despite being the leader of opposition, KP CM never contacted him over the issue.

He said that it was beyond his understanding that the KP CM was threatening to dissolve assembly this month while at the same time warning to stage protest in Islamabad for rights of the province.

Durrani questioned why the PTI government did not attach priority to rights of KP province when it was in power in the federation as well. He said PTI failed to carry out even a single prominent development work in the province, adding during his tenure the province’s debt decreased from 16 billion rupees to 8 billion rupees but today the loan volume has reached to Rs 791 billion.

He also diverted the attention of the House to the deteriorating law and order situation in the province.

Meanwhile, the minority member of PTI Wilson Wazir in his call attention notice said that in the previous budget, Rs300 million was allocated under AIP program for construction and repair of minority places of worship in the tribal districts while Rs 50 million rupees were allocated for provision of scholarships to minority children.

He deplored that unfortunately both the schemes could not get approval of PDWP.

Advisor to Chief Minister on Minority Affairs Wazirzada replied that scholarships have been awarded to minority students of merged districts from the last three years, adding that vocation and skilled training is being imparted to 1800 youth at a cost of Rs 250 million.
He said that construction work has been completed on a Church in Bajaur while work is in progress on construction of two churches in Landikotal Tehsil of district Khyber.

Meanwhile, the Deputy Speaker Mahmood Jan expressed his displeasure over the absence of legislators in the House and remarked that some members come to the House only to make their Tik Tok video.

The House proceedings were adjourned after ANP lawmaker Khushdil Khan Advocate pointed out quorum. The proceedings would resume on Friday at 10am. (APP)