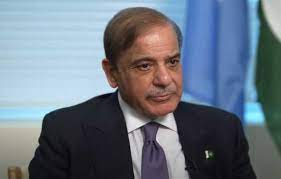 ISLAMABAD: Prime Minister Shehbaz Sharif has said that the number of food-insecure people in Pakistan has doubled to 14 million after the calamitous floods and rains hit the country claiming 1,700 lives and affecting 33 million people.

In an op-ed published in The Guardian on Friday, the prime minister wrote the apocalyptic rains and floods that hit Pakistan last summer claimed 1,700 lives, left a swathe of territory the size of Switzerland under water and affected 33 million people – more people than live in most European countries.

PM Shehbaz’s write-up came ahead of the International Conference on Climate Resilient Pakistan which will be held in Geneva on January 9. The event will be co-hosted by the Government of Pakistan and the United Nations.

In his opinion piece, the premier lamented that the international attention has receded, but the waters have not. Large parts of Sindh and Balochistan provinces remain inundated.

The number of food-insecure people in Pakistan has doubled to 14 million; another 9 million have been pushed into extreme poverty. These flooded areas now look like a huge series of permanent lakes, transforming forever the terrain and the lives of people living there. No amount of pumps can remove this water in less than a year; and by July 2023, the worry is that these areas may flood again.

Pakistan is suffering not just from flooding but from recurring climate extremes – earlier in spring 2022, the country was in the grip of a scorching, drought-aggravating heatwave that caused forest fires in the west. The fact that some of the same areas that received record temperatures were subsequently submerged underlines the sharp swings in weather patterns that are becoming a norm.

Pakistanis have responded to this latest calamity with exemplary resilience. Already facing severe economic headwinds, the government scrambled to generate funds enabling direct cash transfers of more than $250m (£200m) to more than 2 million households. In all, we managed to mobilise about $1.5bn in emergency relief out of our own meagre resources.

We are grateful to the international community and friends of Pakistan for their generosity in helping us to avoid the worst. While the World Health Organization had designated the situation as a high-level health emergency, the feared water-borne diseases and localised epidemics did not break out due to the efficient working of our vast network of medical camps. Similarly, we were able to restore the damaged communication networks between cities and villages very quickly.

Yet more than 2 million homes, 14,000km of roads and 23,000 schools and clinics have been destroyed. A post-disaster needs assessment (PDNA), carried out in collaboration with the World Bank and the EU, estimated that the damage caused by floods exceeded $30bn – a 10th of Pakistan’s entire GDP.

These numbers only scratch the surface of the challenge at hand. They demand a response that would stretch and overwhelm the resources of any country. The UN secretary general, António Guterres, witnessed the “unimaginable” destruction first-hand during a visit to Sindh province in September. Terming it “climate carnage”, the secretary general found himself at a loss for words – “a flooded area that is three times the total area of my own country, Portugal”. This devastation has been greater than that caused by the 2010 floods in Pakistan, which the UN then described as the worst natural disaster it had ever responded to. Pakistan simply cannot do this alone.

This is why the secretary general and I are co-hosting the International Conference on Climate Resilient Pakistan in Geneva on 9 January. We will be joined by world leaders, representatives of international development and humanitarian organisations, and friends of Pakistan to signal support and solidarity with a country that is grappling with a natural disaster not of its making.

We will also present a comprehensive roadmap for post-flood reconstruction and rehabilitation, developed with the assistance of the World Bank, the UN, the Asian Development Bank and the EU. The resilient recovery, rehabilitation and reconstruction framework (or 4RF) essentially envisages a two-pronged response. The first part relates to meeting the immediate challenges of recovery and reconstruction, requiring minimum funding of $16.3bn over a period of three years. Pakistan would meet half the funding from its own resources. But we will count on the continued assistance of our bilateral and multilateral partners to bridge the gap.

The second part of the 4RF outlines Pakistan’s long-term vision for building climate resilience. This would require an investment of $13.5bn over a 10-year period. Building better communications infrastructure and a more robust irrigation system, and designing efficient early warning systems to mitigate the effects of future natural disasters is not a luxury for Pakistan but an absolute imperative.

Of course, I am conscious that the Geneva conference marks only the beginning of a long and arduous journey. But a substantive outcome will reassure millions of imperilled people – who have already lost everything – that they have not been forgotten; that the international community will help them to rebuild their lives.

It will also remind us that we are all – increasingly – at the mercy of forces of nature that do not respect borders and can only be tamed by joining hands. It is, therefore, my sincere hope that our gathering in Geneva comes to symbolise our common humanity and generosity of spirit – a source of hope for all people and countries who may face natural adversity in the future.