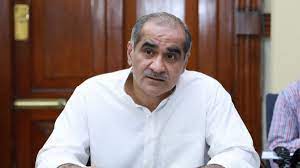 LAHORE: Federal Minister for Railways and Aviation Khawaja Saad Rafique while quashing the rumours about privatization of Pakistan Railways has declared that the department is not up for grabs.

Addressing a news conference in Lahore on Saturday, Saad Rafique said some people are fanning propaganda about privatization. “We will not allow anyone to hard the State,” he added.

The minister maintained that the Pakistan Railways is being upgraded which will ensure better facilities to the passengers.

Responding to a question, Saad Rafique said no airport is being privatized. “It has been decided that operations of only three airports will be outsourced,” he added.

The minister said the government wanted to make institutions stand on their feet.