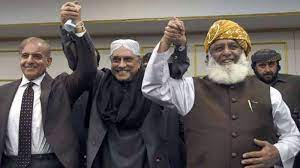 According to reports, Prime Minister telephoned them to finalise the three names for the slot of caretaker Punjab Chief Minister. Subsequently, PML-N will send a list of three names to the Punjab governor on late Tuesday.

The prime minister also consulted with the coalition leaders on the political situation of the country.

Earlier, Special Assistant to PM Malik Ahmad Khan has said that the prime minister has shortlisted the names for the caretaker chief minister of Punjab.

SAPM Ahmad Khan held one and a half hours long meeting with Prime Minister Shehbaz Sharif on Tuesday. He claimed that the premier shortlisted names for the caretaker CM of Punjab during the meeting.

He said these names would be sent to former president Asif Ali Zardari and after his consultation, three names would be forwarded to the Punjab governor in the evening later today.

He, however, declined to reveal the suggested names saying that it would be inappropriate to disclose their names without first consulting allies.

Later, in a tweet, SAPM Malik Ahmad Khan revealed that “for the appointment of caretaker chief minister of Punjab, the PML-N after consultation also agreed on the name of former president Supreme Court Bar Ahsan Bhoon. But he thanked the PML-N leadership and apologized to become the caretaker CM due to the responsibilities and demands of the lawyer politics.”