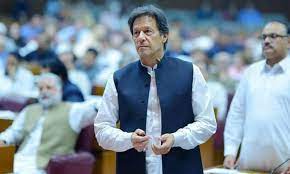 ISLAMABAD: The series of Imran Khan’s U-Turns could not be stopped as in his latest twist, the PTI chairman backtracks on his move to bring a no-confidence motion against Prime Minister Shehbaz Sharif in the National Assembly, on Tuesday.

The inside story of the PTI spokespersons’ meeting came to light.

According to sources, Imran decided that he would not bring the no-trust motion against Prime Minister Shehbaz. He told the meeting that he wanted to punish Shehbaz while keeping him in the government.

The PTI chief believed that Shehbaz could not run the country and Pakistan was going to face the Sri Lanka-like situation in two weeks’ time.

On one hand, Imran kept criticizing former army chief general (r) Qamar Javed Bajwa, while on the other, he continued spilling beans how hard he tried to seek Bajwa’s support.

Sources said he told the meeting that he had sent former finance minister Shaukat Tarin to General ® Bajwa requesting him to help him in averting the attempt to topple his government. But the former army chief refused to help him, sources added.

They said that Imran again lashed out at Bajwa saying that he was enjoying his life abroad while the country was on the brink of default.